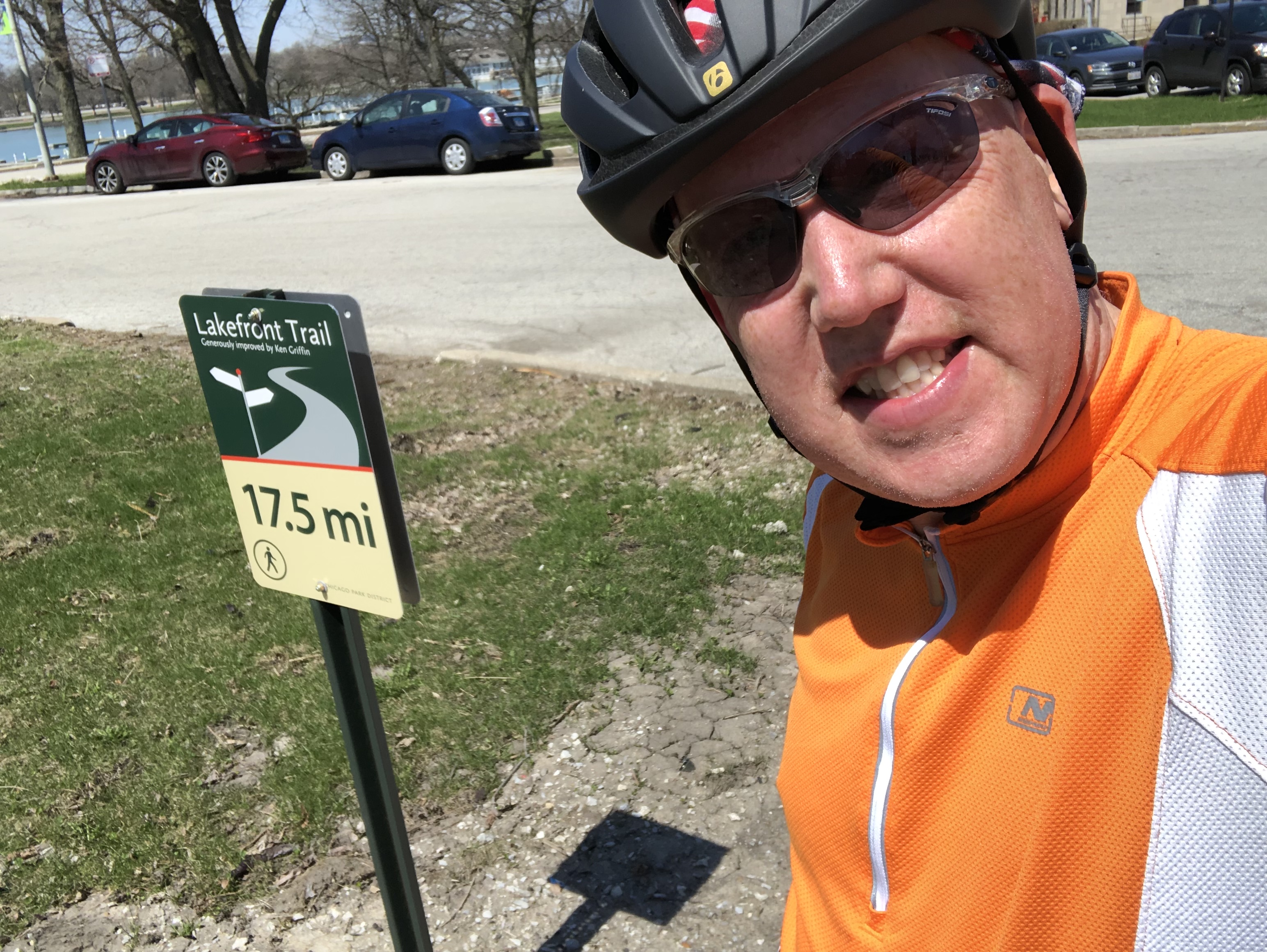 When I was a kid it was tradition for the country side of the family to meet up at Gram and Gramps’ for Easter dinner. My grandmother was a wonderful “farm-wife” cook and we’d all crowd around one or two tables for a delicious meal. My grandmother always wanted us to be around one table if humanly possible, the “kids” table was not a certain part of the configuration.

Since we lived right next door, I would take the week or two before Easter to fix up some of the bikes left over from my Dad’s childhood that were scattered around the barn. I’d make sure the tires were pumped up and that the bikes were in road worthy condition. If the weather was right, we’d take a four or five mile ride, all of us in single file, along the country roads of the area. I always enjoyed this and I think my paternal cousins did as well.

My husband is working today (Go Cubs!) so I had a few hours to myself this morning. Since the weather is beautiful here in Chicago, I decided to go for a bike ride.

I’ve ridden the Chicago Lakefront Trail plenty of times since we’ve moved here, but the northern half of it was under construction for much of last year. The city has been focused on separating the pedestrian from the bike lanes along the 18 miles of lakefront trail, as well as fixing some of the congestion points near Navy Pier and other key tourist spots.

I rode through the north side to get to the very top of the trail today along my usual route and started heading south along the trail. I’d only ridden twice this year, so my body was a little stiff but I was feeling pretty good. I cruised along at 16 MPH or so. The trail improvements are wonderful and it really does help improve safety along this busy corridor.

What a beautiful ride.

This trail is used daily by cycling commuters, fitness enthusiasts, and just folks out for a walk on a daily basis. As many as 70,000 people use the trail on a typical summer day.

All in all I rode over 38 miles today. I feel fantastic. My legs are little stiff but I feel such a wonderful sense of well being right now. I think I broke a spoke on the way home but I got home just fine. I know some folks worry about me riding in the city but it’s very rare that I feel any sense of worry or danger during my bike rides. Chicago has such a wonderful network of cycling trails in the city, both on and off streets, and we really know how to take advantage of them.

I’m looking forward to my next ride. A lot.

In 1979 our local grocery store, which we called “the P&C” and was actually called “P&C Foods”, upgraded their checkout systems from the venerable mechanical NCR Class 5 cash registers to Electronic Cash Registers made by Data Terminal Systems of Maynard, Massachusetts. I’ve included a photo of the type of cash register above; photo courtesy of a screen cap from a Shutterstock video. I don’t know who the cashier is, and the video is from another grocery store somewhere else in the country, but she seems friendly enough.

The P&C installed Data Terminal Systems Model 440 cash registers. These electronic cash registers replaced the functions of their mechanical predecessors in that prices were still entered by the cashier, departments were selected, and there was no scanning available at the time. Other store chains in the area had these new electronic cash registers as well and being the young geek I was at the time, I was able to identify by the printing on the receipt whether the store in question went with the “Series 400” cash registers or the more simplistic (but still quite capable) “Series 300” cash registers. I do remember the Series 400 cash registers were able to do rudimentary price look ups; at “The P&C”, a “53 PL#” followed by a price on the receipt meant my mother bought a loaf of Wonder Bread. After the “53 PL#” was a price, like “.99 GR”. Nowhere did it indicate this was a loaf of bread, it was something I had to figure out for myself.

I was fascinated with these electronic cash registers and through hours and hours of careful studying of the receipts my mother left in the bottom of grocery bags, I was able to figure out how these cash registers worked. A watchful eye of cashiers at work helped my observational understanding. Two cashiers at “the P&C” were a favorite; one was named Delores and she was a gangly sort of young woman always stationed on Register #2. Another, a woman by the name of Betty Brown, was the personification of a sigh; she always seemed resigned to her job and she was usually on Register #1. She didn’t move as quickly on the DTS 440 as Delores did on Register #2.

There isn’t a lot of information online about Data Terminal Systems of Maynard, Mass. My scant research has revealed that it was led by a pilot by the name of Bob Collings of Stow, Mass. From what I am able to gather, he left Digital Equipment Corporation, also of Maynard, Mass. (and a company I worked for in the late 1980s) and struck out on his own after Sears & Roebuck approaches Digital to have them computerize their point of sale operations and CEO and founder Ken Olsen turned down the opportunity. Apparently Mr. Collings felt there was ample opportunity for Electronic Cash Registers that were able to chat with one another in the marketplace, and he, along with other DECcies, formed Data Terminal Systems.

At one time I had a large collection of receipts from these cash registers, as I saved that sort of thing while I studied them, but I believe they have long been lost. After all, it’s been decades.

I would love to find one of the cash registers in a thrift store or flea market to see if I can figure out how they tick. From the little information available online about DTS, I believe they were 4-bit machines, with processors made by Rockwell. The earlier models didn’t have scanning, but all models were designed to by upgraded to a more powerful model by field personnel. I do know they had “Star Trek (The Original Series)” look to them and I found them very nifty. I can still hear the distinct sounds of the Seiko EP-101 (later known as “Epson”) printer in my head.

My search continues for equipment by Data Terminal Systems. I hope to create a website dedicated to the memories and information of this company that started the Electronic Cash Register revolution as we know it today.

Maybe one day I’ll stumble across one of these registers at a flea market here in Chicago. I know these machines are what got me started in computers to begin with.