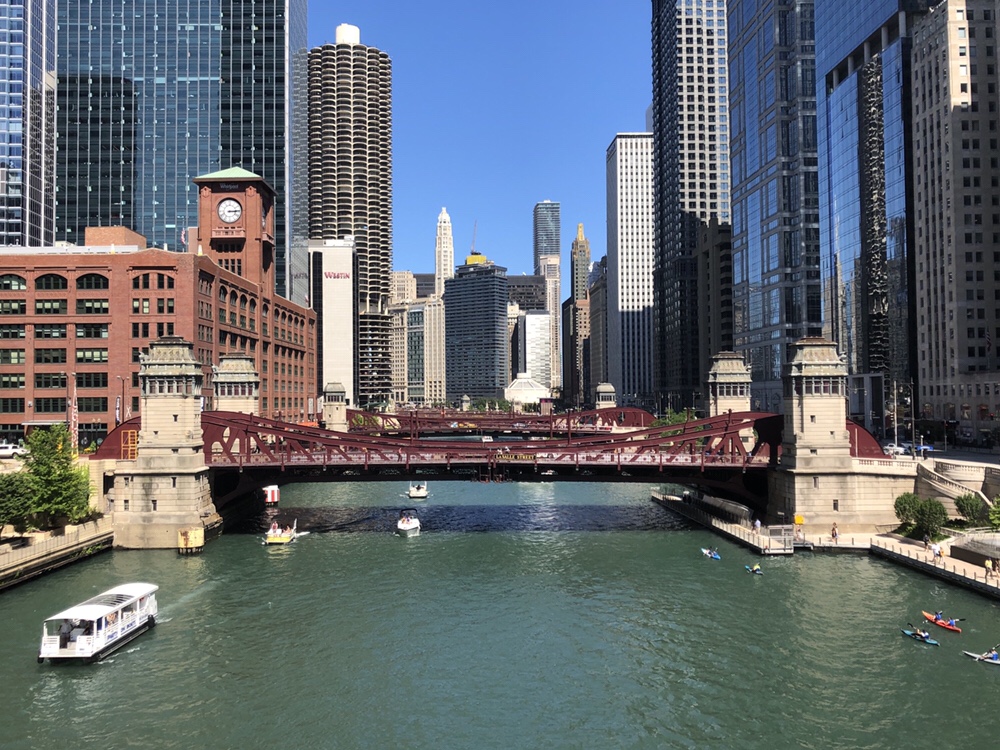 The two tourists sitting in front of us on the Brown Line, pointing out landmarks as we went along, inspired me to snap this photo from the moving train. I feel a love for this city that others find unbelievable. Chicago gets a bad rap, and there are small pockets of bad places in the city, but overall I love it here and moving here was one of the best decisions we’ve ever made. Seek your happiness so you can find it.

A friend from high school posted this on Facebook. People need to read this:

Okay, I have resisted fb for weeks, but I just need to state some truth that many of you are not aware of.

1) Our Big (her husband –J.P.) is a federal attorney, not an immigration attorney, but someone who knows his way around federal court. He is trying to reunite children with their parent, and we are in TX. Children have been moved all over the country without any records being kept. There is a federal court order to reunite these children with their parents, but the administration is unable to find these children.

2) Under international and federal law, any human that sets a foot on USA soil is entitled to due process. For you morons who do not understand what that is, look it up. Google is your friend.

3) 90 percent of these parents were seeking asylum. For you morons stating seek it from your home country, one cannot seek it from one’s home country. Political and religious asylum must be pursued from inside the United States. That is the law. A woman and her five year old son were seperated AFTER once she crossed the border, she flagged down border patrol and asked for asylum. Not someone looking to buck the system. But someone looking for a better life. That is what America is. Why would people flag down Customs and Border Patrol if they were not trying to do the right thing?

4) 99 percent of people let out of custody, follow through with their court appointments. If they are not granted asylum, they are deported.

5) yes there were children detained under the Obama, Bush and Clinton administrations. They were UNACCOMPANIED MINORS. Also, children that were with adults who may not have been actual cbildren of the adults crossing the border….meaning sex trafficking or kidnapping. They were detained as well.

6) Whatever you think is okay, think if your child was taken from your arms. Think about it. Think long and hard. Think about being in a situation that was so desperate, that you decided to travel 3000 miles with nothing but the clothes on your back and a couple of bucks in your pocket. I am a mother. I would never move my children unless their lives were in danger. These mothers are heros.

7) Before you complain, UNDERSTAND THE FUCKING LAW. AND UNDERSTAND HOW THE PRESENT ADMINISTRATION IS BREAKING IT

8. ) If you are a mother, and accept this, shut the fuck up. You have no right to speak. Any mother that accepts this is despicable.

Defriend me, hate me, whatever you want to do but you are dead wrong.

9) It is easy to be white in this country. So many of you are so afraid. White people not understanding white privilege is like a pretty girl saying, “Why is everyone so nice to me??”

10) I can always understand conservative viewpoints. I get it. But this broke me. Kidnapping children for political gain is not only disgusting, but evil, and people will pay.

11) The real haters will never get this far. The people who accept this despicable, hateful treatment of children will never read this. Why didnt they? They are cowards, and do not care about the lives of BABIES. Cowards.