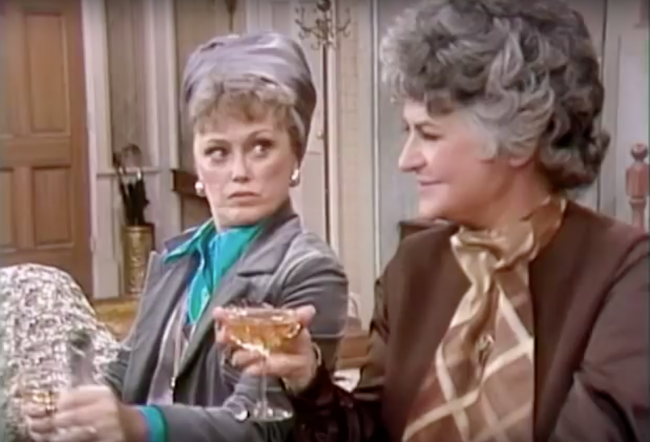 I enjoy watching reruns of the old TV series “Maude”. Don’t tell anyone but they’re readily available on YouTube. The versions I’ve found are cut down for syndication, but you still get the gist of the story, despite the attempts to wedge more commercial time into these masterpieces. One would think the story lines wouldn’t age well, since “Maude” was so politically and socially topical back in the early 1970s, but since the Trump administration is so adamant about pushing our social agenda as far backwards as possible, “Maude” feels like it was made yesterday.

I hit the pause button on a video last night and it happened to stop on the screen cap I’ve included with this blog entry. The cap struck me as hilarious. Of course, it could be because I’m drinking beer and sitting on the lanai (see what I did there?) while typing this blog entry, but the look Vivian is giving Maude, who is exuding her typical smugness, is priceless. It feels Gay Pride Month appropriate. When we go to Chicago’s Gay Pride parade next weekend I’m wondering if I’ll see any Maude and Vivian drag.

“Rue, I have no desire to play ‘Maude and Vivian meet Sue Ann Nivens'”. That’s what Bea Arthur said to Rue McClanahan when she called up Bea to convince her to consider joining the cast of “The Golden Girls”. My mother didn’t let us watch ‘Maude’ during its original run; it was way too adult for my elementary aged mind. My great Aunt Jenn had the height and a bit of a Bea Arthur presence. My mother was a closeted feminist; she tried to fit into the rural town we called home, but being raised in a decent-sized city, she was independent and thought outside of the cowtown box. I inherited that worry of what others think of me from my mom, at least to a certain degree. As I approach the half century mark I don’t really give a damn anymore.

You know what’s kind of kicky to me? Rue and Bea are playing characters that are younger than what I am today. Same goes for Bill Macy and Conrad Bain. They are actually in their late 40s and here I am less than a month away from 50. I don’t feel like I should be waltzing around with a head of gray hair and a dress over a pant suit. I still feel young and vibrant and alive. I wonder if Bea and company felt that way back when “Maude” was in its original run?

I’ve never been a huge fan of “All In The Family”. Sally Struthers’ whining seemed way too formulaic to me. But I can groovy on “Maude”; she’s just as groovy as the Wurlitzer organ that’s so prominent in her theme song.

“Amelia Earhart flew a lot of airplanes, except that time when she didn’t come back”. She what I did there?

I think the beer is kicking in a little bit. Mrs. Naugatuck would be proud. OH! I rode my bike by the old Cabrini-Green Housing Development a bit south of where we live. J.J. wouldn’t find it so “Dyno-mite!” anymore. It’s been gentrified and is pretty much prime real estate here in Chicagoland.

God’ll get me for this blog entry.