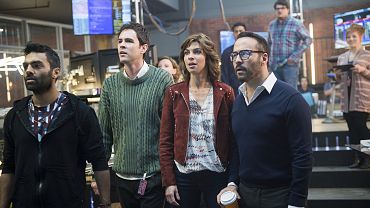 Earl and I binged watched the last three episodes of CBS’ “Wisdom of the Crowd” tonight. There are two remaining episodes scheduled for January; the show has been cancelled, mostly because of the alleged sexual misconduct charges against series star Jeremy Piven. It’s a shame this show has been cancelled as it’s taken this long for the show to find its stride. The technology is a bit showy for television but the concept of the show is interesting: a crowdsourcing application is used to solve crimes. The show also tackled some interesting challenges we are seeing in today’s society, including video “stars” being stalked by other users. On the show the video platform is called AllSourcer, but in reality it’s YouTube. Our society is fueled by notoriety and this one episode in particular tackled that head on.

It’s a shame there’s only two episodes of the series left. Like “Century City”, the short lived lawyer show on CBS from 2004 that took place in the year 2030, “Wisdom of the Crowd” is just finding its ground as it meets its early demise.

One of the things I like about “Wisdom of the Crowd” is the use of crowdsourcing. Engaging users into an application platform and urging them to make quality contributions to the information being shared is so compelling. Using the ‘wisdom of the crowd’ to solve problems that plague us today should be where we’re headed with technology today. We have a great number of steps in that direction: Waze, Wikipedia, Yelp, TripAdvisor: all of these platforms rely on quality content from contributors. There has to be a sound, trusted way to curate this incoming data. This is tricky for software engineers, this is tricky for algorithms and this is tricky for human screeners, but the community contributing to the platform bears the ultimate responsibility.

Is our society today ready to handle wide-scale crowdsourcing efforts? I wish this was the case but honestly I’m skeptical, especially with the amount of disinformation that is spread on the social networks. There are many bad actors that use Twitter, Facebook, etc. for building distrust and spreading lies as fact. They’re the new avenues for FUD: Fear, Uncertainty and Distrust. At one time I would have considered Twitter a crowdsourced event platform. Earlier in Twitter’s history I used it as a source of late-breaking news. Today I’m skeptical of anything I see on Twitter. The company has failed in securing the authenticity of the information on their network. This is a shame, because Twitter had the potential to be one of the greatest crowdsourced platforms out there. But they went for the numbers and the revenue. Quantity over quality. Ad revenue over accurate information. A wasted opportunity that has moved into the realm of notoriety.

I’m intrigued by the concept of “Sophe”, the crowd-sourced crime solving platform on the show “Wisdom of the Crowd”. I like to think that if users think they are doing good thingin the world through an app, they’ll share their information at face value and hopefully bias is set aside. Is the U.S. ready for a real-world “Sophe”? Only time will tell. I’m sure someone out there is already working on building such a platform. I know I would participate.

In the meanwhile, I’ll keep writing quality reviews on Yelp and TripAdvisor and sharing data on Waze. I like being a voice in the crowd to make the world a better place.