Earl and I have been working on cleaning out our storage areas throughout the house in preparation for our move to Chicago later this year. Earl has been leading this charge and every day he is tackling a closet or a cupboard or a long forgotten drawer. This weekend we worked together to disassemble some of my extraneous geek toys in the “server room” in the basement.

We are probably the only house on the block that had a server rack holding two servers and two file servers with plenty of storage space. The two servers were old computers that had been repurposed for server use – one of the computers was date stamped 1996. An IBM Personal Workstation, it was a Pentium II/233 running Linux. Its task was to flip relays to run the clock system collection wired throughout the house. On the wall was a much newer master clock designed specifically for that task but I liked the idea of flipping relays via a program I had written. I relented and moved the control over to the master clock and decommissioned the ancient computer.

The second server was an old point of sale terminal from an auto parts store repurposed to run Linux and provide “gateway access” to the network at the house. With today’s technology there are much better ways to get to our home network, so I decommissioned that server as well.

The two file servers provide backup capabilities for our computers when we are connected to the home network. They also hold the hundreds of hours of flight and other video I’ve taken with the GoPros. All of our music and photos are also backed up on these two file servers. This evening I went around collecting other external drives I had hooked up to various devices in the house and centralized all the storage. 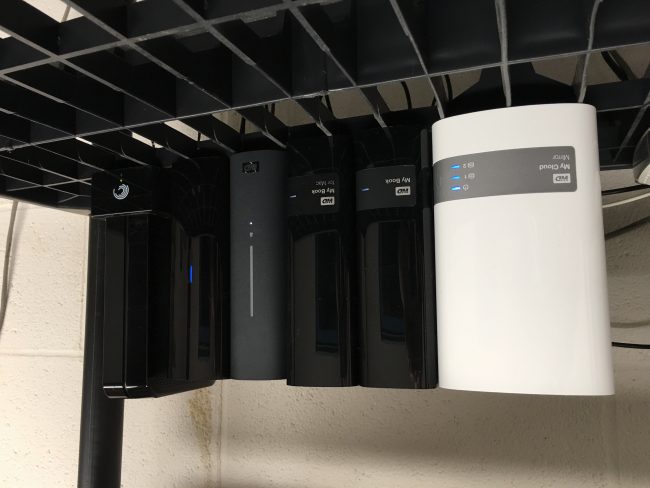 We now have nearly 20 TB of file storage in the house. It’ll take a lot of downloading to fill up that space. The hard drives are divided up between two little file servers designed specifically for this purpose. One day I’d like to take all the hard drives out of their enclosures and install them in a Drobo 5N2 so that everything is completely centralized and redundant.

My life as an IT guy is never done.