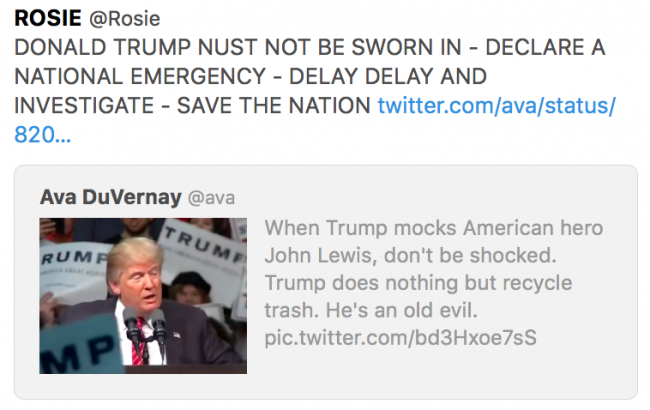 I tweeted back at Rosie O’Donnell with a response. Honestly, I feel like folks are just disregarding the intelligence from, well, the Intelligence folks in D.C. because they were told that it’s all fake news.

The Democrats need to get their act together. Now.

I received many tweets hurled back in my direction in response to my response to Rosie’s tweet. Most of them were unkind. Several were just downright hateful. The majority of them carried common themes: “Trump won, get over it”, “you’re a stupid liberal, cry your liberal tears”, “stop being a special snowflake”, etc. All but two of the responses were from accounts with less than 100 followers. These folks apparently created accounts just to troll folks who speak out against Trump.

I now understand why Trump won the presidency, especially if I heard the voice of “the people”.

I mentioned this in a tweet right after the Golden Globes last week, but Viola Davis was asked what she thought about the election of Donald Trump as President. Her response nailed it. We need to work to make our country a better place by starting with the people.

We have a long journey ahead of us.

I told Earl this evening that I was losing hope. He reminded me that there is always hope, it might just not be where we are looking for it. I revised my statement and said that I see no hope in the next Presidential administration and I certainly don’t believe that the next president has any vision of hope. Darkness pervades the country right now.

It’s a struggle, but we must remain as part of the light.