Early this morning my phone chimed with an alert usually reserved for “Breaking News”. I set this up a while ago. The chime has sounded for earthquakes, tsunami warnings, mass shootings, things that are happening in the world that can be quite concerning. This morning, the Breaking News was that Time Magazine had announced their Person of the Year for 2016.

Abuse of “Breaking News” notifications results in the deletion of that app (name intentionally withheld) and my ignoring of anything further spewed from that “news organization”. It’s almost as bad as talking about the lives of the Kardashians on Twitter. Instant deletion in my book.

Time Magazine has named President-elect (PEOTUS) Trump as their Person of the Year. 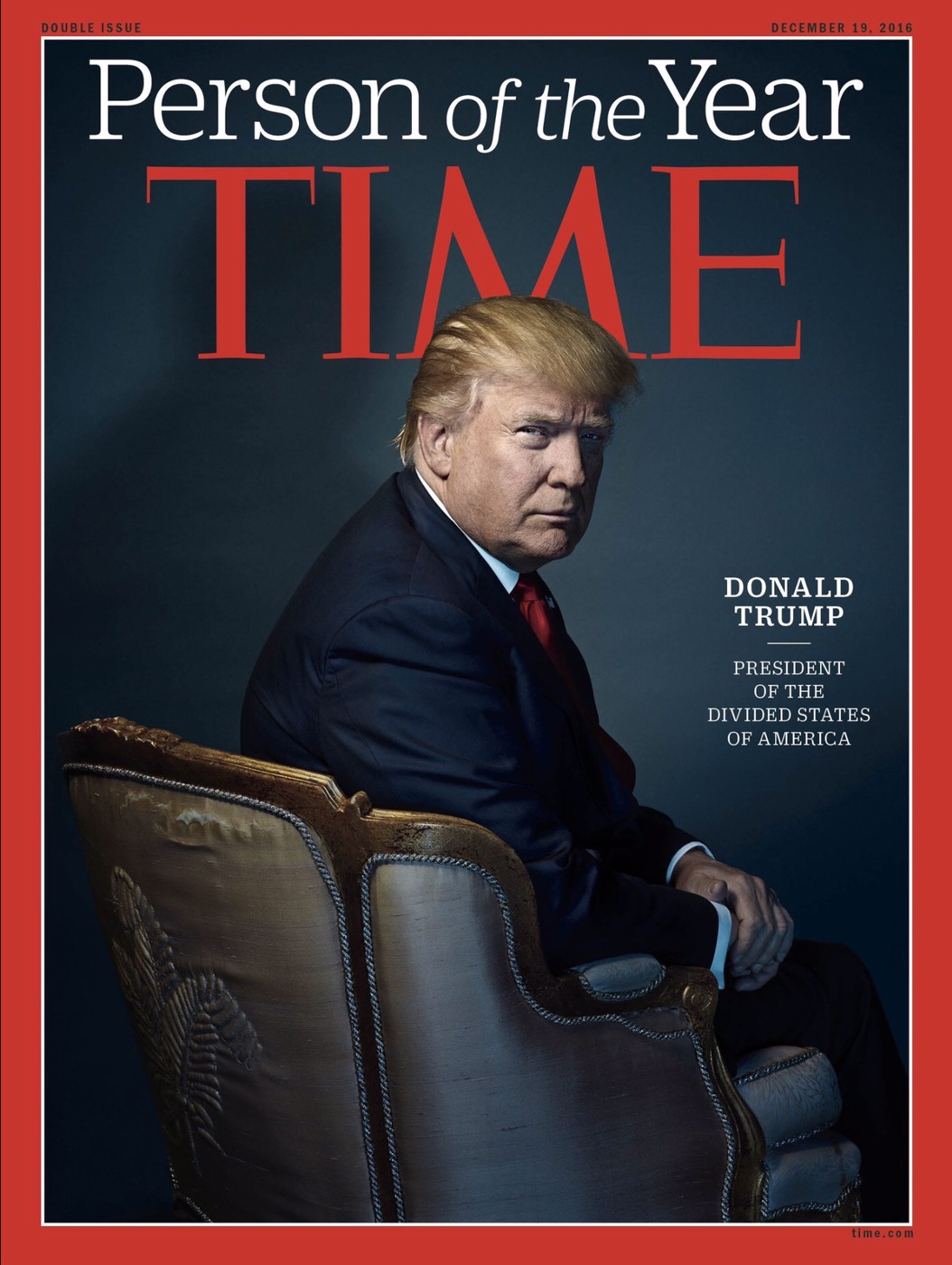 The caption under Mr. Trump’s name is “President of the Divided States of America”.

At first I was angry that Time was pandering to PEOTUS. I felt like they were trying to get in good graces for his upcoming dictatorship Presidency. Mr. Trump has mentioned, in a backhanded way, that he doesn’t like the media and his actions have historically indicated that he enjoys punishing journalists. This Breaking News announcement felt like an olive leaf of sorts.

But then I looked closely at the photo.

First of all, this is not a flattering portrait of the President-elect. He looks menacing. The lighting is dark. The shadows are stark. Mr. Trump’s head is placed squarely under the “M” in TIME. The first thing I saw was a pair of horns. All that was missing was a graffiti quality to the lettering. There’s also the “President of the Divided States of America” byline.

This is not a flattering cover. This is a portrait of a man who sees himself as Big Brother. And I’m not talking about Julie Chen.

Upon further study and reading on the Internet, I began to wonder if the chair featured in this photo was a reproduction of a chair used 78 years for a similar Time magazine cover. 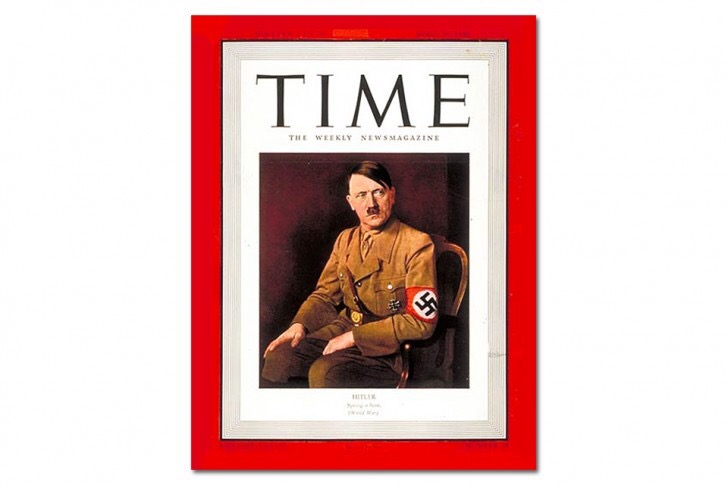 It was then that I remained irked by the abuse of a “Breaking News” alert for this announcement but my displeasure about Mr. Trump being named Person of the Year seemed to be not so bad. Time stroked the PEOTUS’s ego, albeit in a backhanded way, but they deftly conveyed the current mood of the nation. We are a divided nation. Many of us do feel that we have entered dark times. Many feel that Trump has no understanding of the role of President and that he has confuses it with a dictator-like role.

Honestly, if anyone has impacted the United States in this seemingly dismal year of 2016, it would be Trump. So now when I see this cover being, er, trumpeted across the web, newsstands and television, I smirk a little bit. Kind of like when this crazy eyes photo was featured a few years ago. 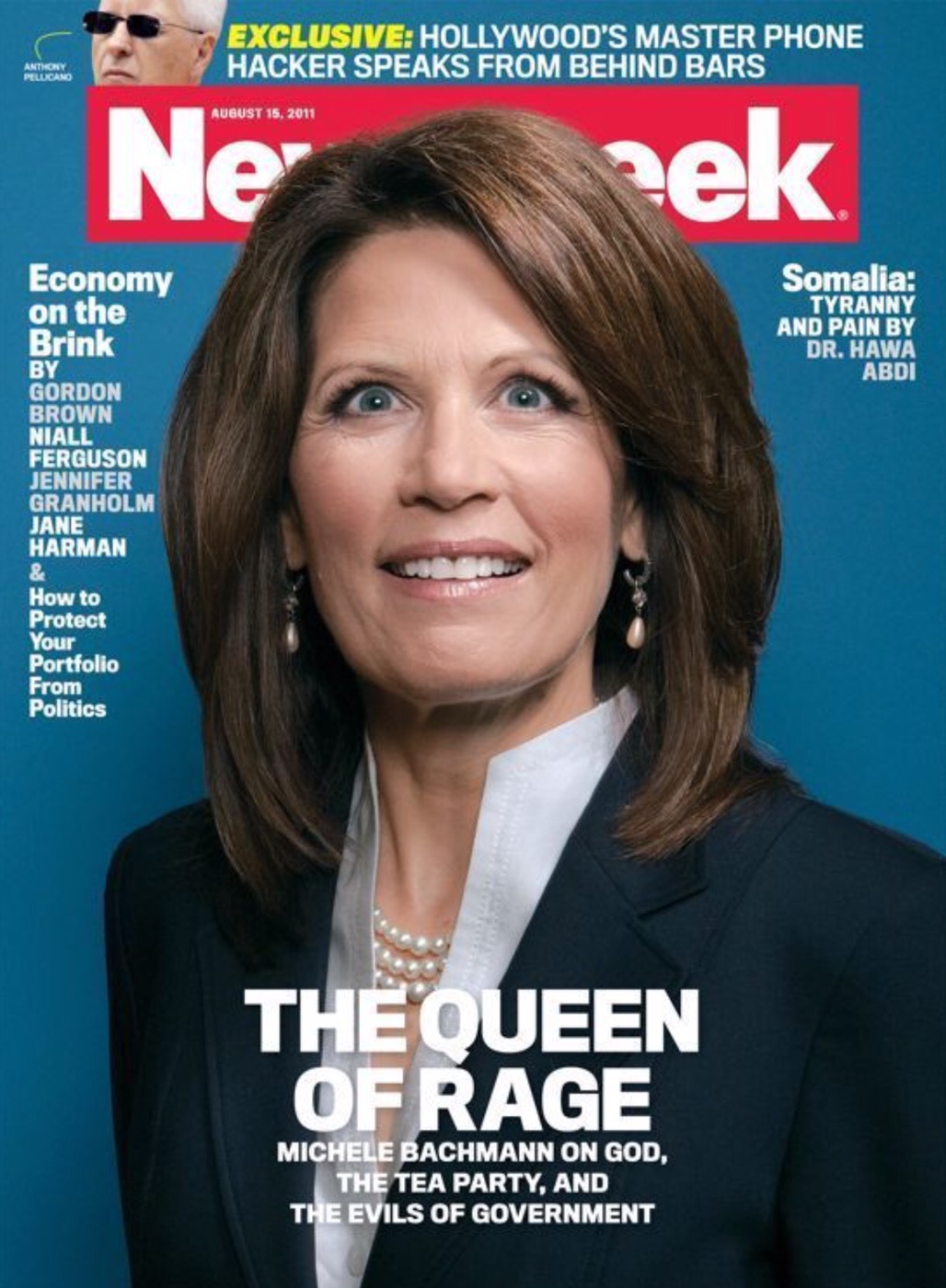 We are in for some crazy times in these here Divided States of America. We might as well make the best of the situation and smirk while we can.