My Dad passed away five years ago today. It’s hard to believe that it’s been a half decade since he passed during his last flight, the second flight in his second homebuilt airplane. He was test flying his Wittman Tailwind W-10 when he crashed on the left downwind to Runway 33 at KFZY Oswego County. I’ve flown over the spot many times. I think of him more often than that.

I consider myself a very lucky man to have grown up around airplanes. My dad earned his pilot license when I was still in elementary school so I spent many hours with him in the right seat of a Cessna or a Piper Tomahawk and later in the backseat of the Piper J-5A he restored. As an adult I flew with him a few times in his homebuilt Acrosport II. That’s the airplane in the pictures on this blog post. Passengers ride up front in that airplane. My first blog post was about flying with Dad in the Acrosport II. 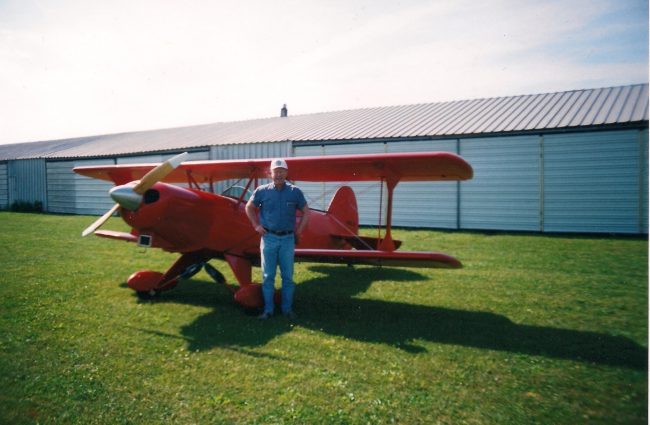 I once asked my Dad why he was building a second airplane, after having restored the J-5A and later building the Acrosport II from scratch. He told me that he liked the Acrosport but flying it was sometimes like driving a car with the hood open. He wanted more visibility.

I had always wanted to be a pilot but kept putting it off while he was still alive. If I wanted to fly I could just go with him. It was while standing in line at the funeral home, hugging visitors as we exchanged pleasantries, that I realized I would not be able to fly in a small airplane again unless I continued the family tradition and became a private pilot. I could not imagine being earthbound for the rest of my life.

Once I became a private pilot I was able to fully understand what happened five years ago today. Carb icing resulting engine issues at pattern altitude, so he most likely stalled into a spin. Having less than one hour in a brand new experimental airplane his familiarity with how the airplane would handle in a stall would be cursory at best. Knowing my dad he read everything he probably could have on the subject but I don’t think he ever flew another W-10 before flying the one he built. His death probably made me a more conservative pilot but that’s not a bad thing; it’s my goal to be a very old pilot.

My dad was my inspiration. You could always tell what he was thinking when he was gazing skyward. Even though he has passed on, he still inspires me everyday.