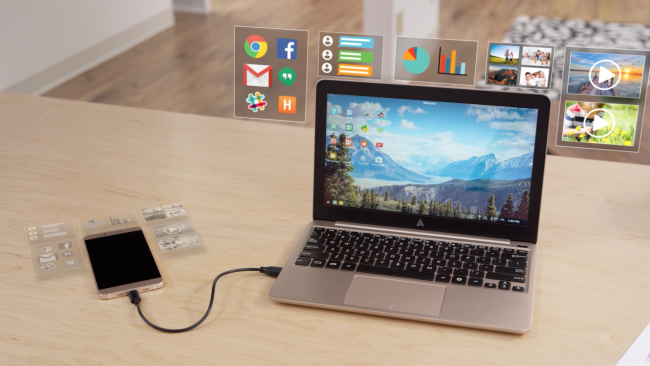 Photo from getsuperbook.com
In my previous blog entry I mentioned that my ideal computing setup would be focused on my iPhone, or realistically, smartphone. I think it’s kind of silly that we’re all carrying around two or three devices. Our backpacks and purses and the like are crammed with a phone, a tablet and a laptop.

A few months ago I supported a Kickstarter campaign for the Superbook. This magically device is a laptop shell that is powered by the computing power of your Android device. There’s no tricky firmware to install, you don’t have to go through a million steps to make it work, you download one app from the Google Play store and plug in your Android device. Voila! You’re working on a laptop powered by your smartphone. And because you’re using your smartphone, you have instant access to your cell, wifi and Bluetooth connections.

The only kicker of this project is the fact that it is limited to Android devices, however, further reading showed that you can hook the Superbook up to non-Android devices and use it as a second screen. I backed the Kickstart campaign and hope to see my very own Superbook at the beginning of the year.

Videos that depict what technology can bring us in the near future, realistically the beginning of the next decade, are usually focused on one device providing all the computing horsepower we need. Corning Glass’ “A Day Made of Glass” focuses on personalized tablets that tie into glass displays scattered about the world. Microsoft’s “Office 2019” and “Office 2020” series focuses on translucent phones that interact with panels, surfaces, etc. In none of the videos do we see users carrying around multiple devices, juggling data between an iPhone, an iPad and a MacBook Pro. The interaction is simple, immersive and most importantly, condensed.

The recent hardware announcements from Apple don’t really play into the version of the future that other companies are envisioning. I think that Apple can make amazing hardware that plays into the “single device” paradigm, but honestly I think they’re more protective of their revenue stream. iCloud often feels like a “me too” product. It can be clunky and cumbersome to use.

In the long run it’s my hope to see the future depicted by Corning and Microsoft, with one powerful personal device doing all everything, come to fruition during my lifetime. That’s the future I’d like to see and I may have to shift my computing paradigm to help make that future come true.

Superbook is an excellent step in the right direction.