As a software developer I spend a lot of time typing of computer keyboards. Because of this I am rather picky about the keyboard that I use as my daily driver. Modern PC keyboards of the 2000s tend to be quite mushy and breakdown over time. The latest trend in keyboards has been those low-profile, nearly zero-travel chicklet type keys. This is a result of many PC manufacturers trying to follow the lead that Apple started with this trend. I guess most people forget that the old Atari home computers in the 1980s had similar chicklet keys. I didn’t like them then and I don’t like them now.

Back in the day I loved the old IBM “Model M” keyboards. These are the ones that are really loud and clicky. The keycaps and the arrangement of the alphabetic keys are reminiscent of the old IBM Selectric Typewriters. The feel, the pressure, the response are all typewriter like. Those old Model M keyboards were fantastic to type on and I was always able to fly along at a rapid pace when placed in front of those keyboards. One of the best things my Mom ever did was allow me to type on her typewriter growing up, but with very strong encouragement to use the correct fingerings for typing. 40 years later I am still able to type over 100 words per minute.

Before buying a new keyboard I went into my technological boneyard and found a full-sized Apple keyboard from the early 2000s. This was from one of our old white cased iMacs. They keys are white and the whole keyboard has that translucent Apple feel to it. Typing on it is alright but it’s nothing to write home about. I can fly along pretty well but the response was mushy.

Still dreaming about the IBM Model M keyboards from days of past, I went searching on the Internet and found that Unicomp makes a variant of the old IBM Model M keyboard, including a model made specifically for Mac! I know, the horror, but having an IBM designed keyboard with an Apple layout would be quite cool and in my eyes would be the best of both worlds. The keyboards are fairly pricey, but they’re built like a tank and the keyboard should theoretically last me a long time. So I ordered one. 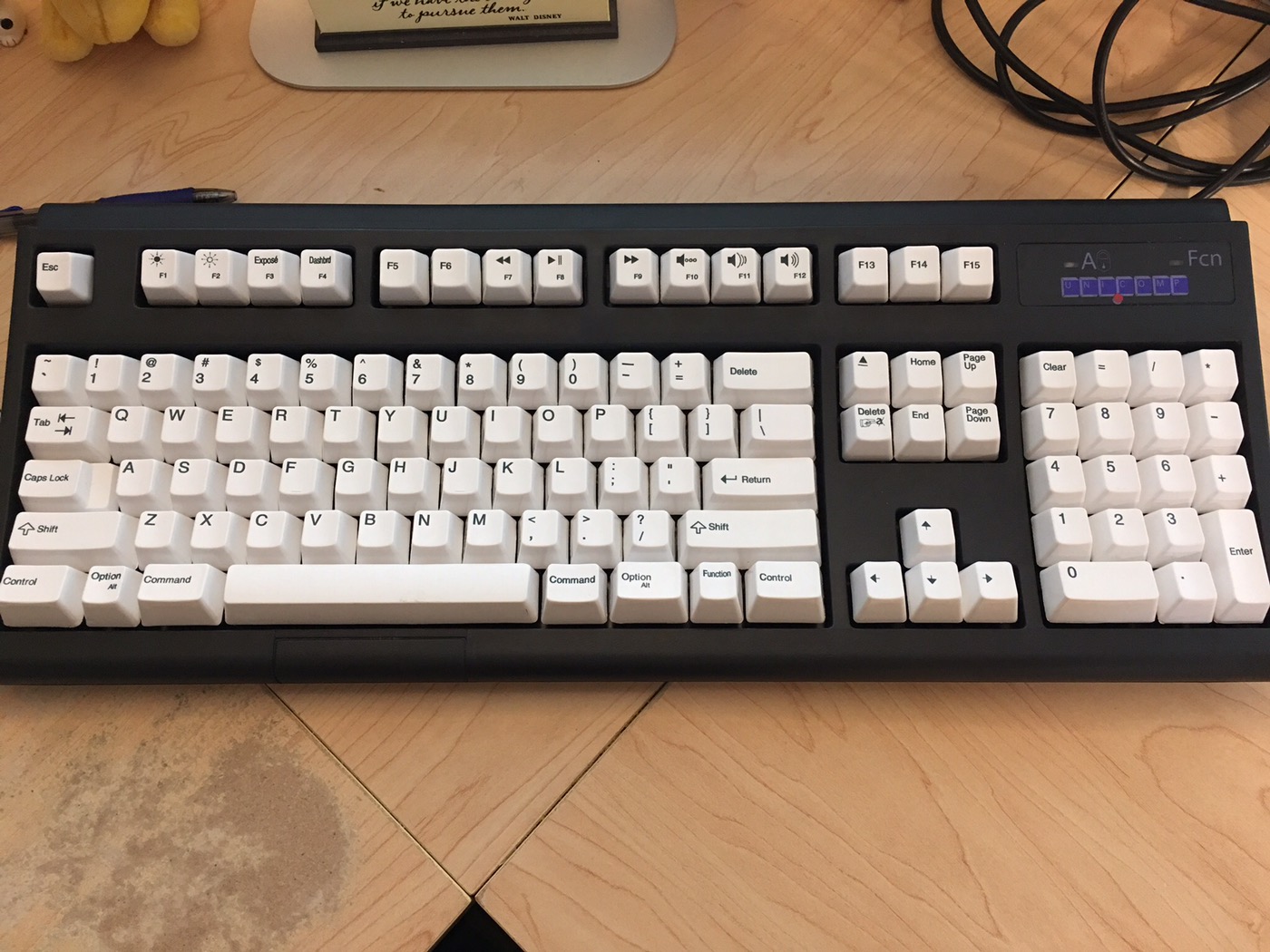 Typing on the keyboard is a dream. I tested my typing skills on it this afternoon and I was able type at 109 WPM on it. Not too shabby. I have to admit there were a couple of issues when it arrived. The left corner Control key had popped off and the A key’s response was intermittent at best. I took the underlying key cap mechanism from F15 and swapped it with the A and I haven’t had an issue since. Still, for a keyboard clocking in at over $100, this is a bit disappointing. So much for “it just works”, but that’s why I usually buy Apple products.

Other than the two small hiccups, I am very pleased with the keyboard and I was able to fly through some coding I had to do this afternoon. The clickity click click of the keys allowed me to get lost in the moment and find my coding zen.