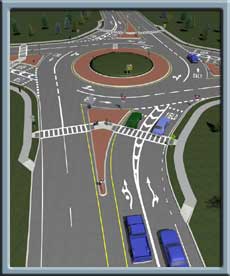 Last night Earl and I were driving through town when we came to a roundabout. Because I was entering the roundabout, I yielded at the YIELD sign and looked to my left to see if there was traffic coming.

It was then that I observed a woman driving a beat up minivan entering the roundabout at the next leg to my left. She ignored all signs, all traffic in the roundabout, stepped on the gas and drove through the intersection as quickly as possible. Unfortunately, her behavior is quite common.

Many people in this area see roundabouts as scary, dangerous, incomprehensible and most importantly, un-American since they have lots of them in Europe. Because of their ties to socialism, folks ignore all traffic signs and just barrel through the roundabouts as quickly as possible, paying no heed to what’s happening with traffic at the moment. Perhaps it’s that sense of American Entitlement that gives folks “permission” to do what the hell they want at intersections with a roundabout.

As an almost Civil Engineer, I can tell you that roundabouts are safer for pedestrians and cyclists, safer for motorists (when the roundabout is used properly), safer for homes and businesses around a roundabout and better for the environment. Roundabouts keep traffic moving slowly. That’s what they’re designed to do: slow you down and allow you to navigate the intersection without having to stop (unless there’s a pedestrian crossing or conflicting traffic).

So let’s review how a roundabout works:

1. In the United States, roundabout traffic travels counterclockwise. So, if you want to turn left at the intersection, you go around 270 degrees and exit right to make your left hand turn.

4. When you are exiting a roundabout, use your turn signal to indicate that you’re turning out of the roundabout. This let’s those yielding to you know what you are doing.

5. Roundabouts are not the same as the big traffic circles and rotaries built in the 50s and 60s. They were designed for higher speed traffic. Today’s modern roundabouts are well marked and designed for speed limits around 15 MPH. You shouldn’t whip around one as quickly as possible.

Roundabouts are not hard to navigate if you have common sense. Unfortunately, common sense is a rarity these days and some motorists can’t think on their own. Bring along your common sense and everything will be fine.