I don’t always listen to music while I’m working. Working at home alone, I usually need some sort of noise in my home office as too much silence bothers me because when it’s too quiet all I can hear is the ringing in my ears. My number one choice for sound is ambient music of some sort; words can distract me when I’m deep in a project.  But around mid-week I might change it up a bit and have a television show playing in the background or something. After being alone in the house for a couple of days, hearing any sort of conversation going on is a good thing.

Today I dialed up YouTube on my iPad and started looking around for something to play in the background when a familiar face caught my eye. The thing that was odd about the suggestion from YouTube was that the familiar face wasn’t paired with an appropriate name. I expected to see “Maude”, “The Golden Girls” or even “The Stars Wars Holiday Special” but next to a picture of Bea Arthur was a different title, “Amanda’s By The Sea”.

The suggestion was a playlist containing 13 episodes of this series, “Amanda’s By The Sea”, or as it was shortened to, “Amanda’s”. 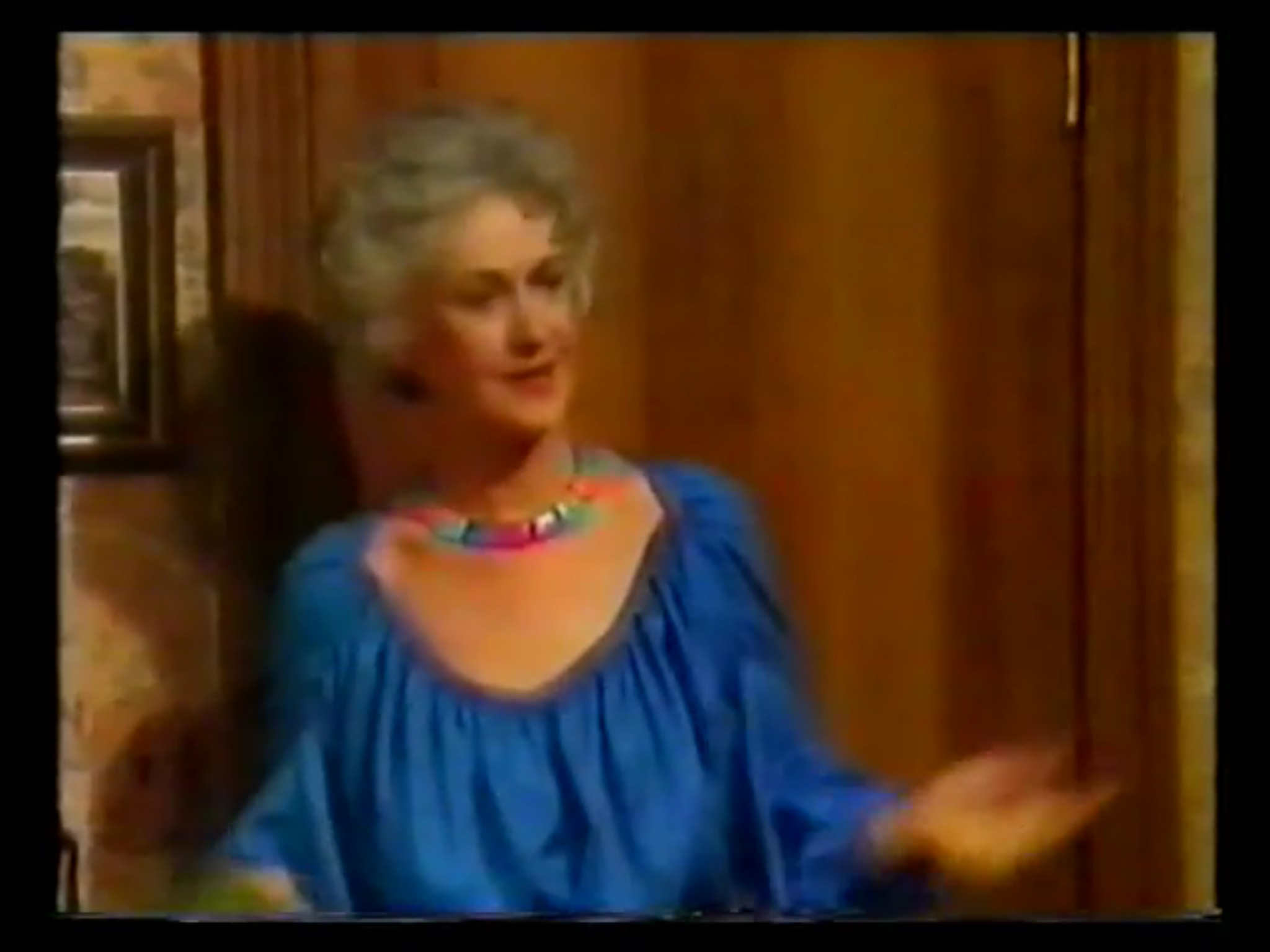 A brief search on the Internet filled me in.  In 1983, Bea Arthur starred in the aforementioned “Amanda’s” as Amanda Cartwright, widow and the owner of a small hotel in California appropriately named “Amanda’s By The Sea”. The show was loosely based on the UK’s “Fawlty Towers”. The series lasted just half a season on ABC before cancellation; 13 episodes were filmed by only 10 made it to the air. The other three were later shown in some obscure syndication run. 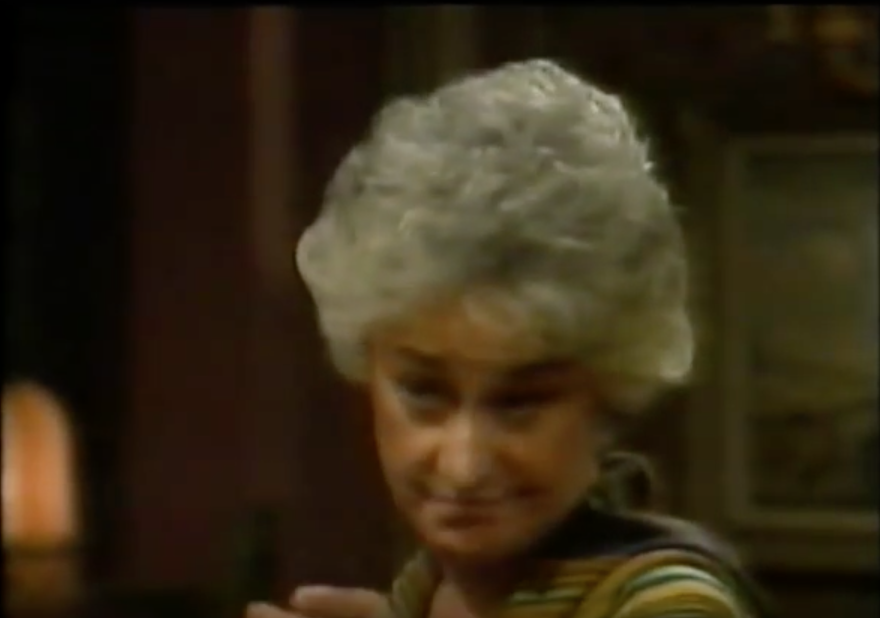 I decided to watch an episode at lunch time. While not awful by any means, I can see why the show didn’t make it. The cast is a little unbalanced. Watching “Amanda’s” made me realize that while Beatrice Arthur was a magnificent actor, she needed someone strong to play off and the supporting cast didn’t quite fit the bill. Fred McCarren plays her son (and the hotel manager) Marty, his wife is played the same actress that played Stan’s second wife Chrissy on “The Golden Girls”. The cook is played by the actor that played Boss Hogg’s nephew or something on “The Dukes of Hazzard”. Another character, I think his name is Alto, played much comic relief being short and speaking with very broken English. The show is a little more slapstick than “The Golden Girls”.

And here’s where it gets a little odd. MANY of the guest stars on “Amanda’s” later appear on “The Golden Girls”. Since the series was filmed in 1983, Bea Arthur looks a lot like Dorothy on “The Golden Girls”. Some of the sight gags used on “The Golden Girls” are seen here, for example, “would you hand me that loaf of bread. No, the other one” and then Amanda proceeds to slam it over the head of the person she is annoyed with, much like Dorothy hitting Rose over the head with a newspaper. In one scene, Amanda is arguing with a customer about a restaurant bill and she argues with the exact same customer, in practically the same set, during her guest appearance on “The Golden Palace” only there her name is Dorothy.

It’s a little like watching Pert Kelton play Alice in the original version of “The Honeymooners”. 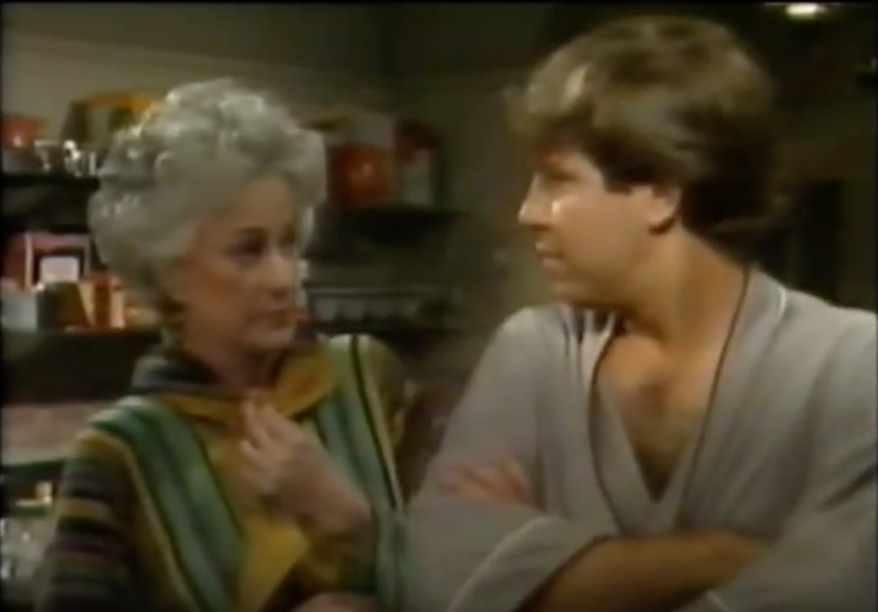 Of course, Bea is Bea. While there are some similarities between mannerisms and the like between her portrayals of Maude and Dorothy, since there was eight years between the two series, there are obvious differences, whereas, since “Amanda’s” came only two years before the premiere of “The Golden Girls”, it’s easy to spot the much closer similarities between Amanda and Dorothy. Heck, Bea is even wearing the same type of wardrobe as what was found later on “The Golden Girls” complete with the boots and the long skirts. I can’t help but think that some of the storyline ideas also made it over to “The Golden Girls”.  It’s weird watching the show because it feels familiar but out of place at the same time. Kind of like when you walk into a Kmart in a different city, it’s a Kmart, it feels like Kmart but everything is in a different place.

As I wound up my workday I played a couple more episodes while I tidied up email and such. I definitely believe that Bea can be Bea when she plays off other strong actors. Both the casts of “Maude” and “The Golden Girls” balanced Bea out brilliantly, but like “The Golden Palace” after Bea left “The Golden Girls”, when an element is missing, it can be OK, even quite good, but it feels very out of balance. And that’s the way “Amanda’s” feels, out of balance.

I’ll probably finish watching the series over the next couple of days because I have always adored Bea and it’s fun seeing her in something else that feels comfortable yet I can’t recite line by line. It’s available on YouTube if you’re interested in checking it out.

Google announced today that they are discontinuing support for their web browser, Google Chrome, in April 2016 for Windows XP, Windows Vista and Mac OS X 10.6, 10.7 and 10.8. Current versions of the mentioned operating systems (Windows 7, 8, 10, Mac OS X 10.9, 10.10, etc.) will continue to receive updates to the popular web browser.

Many folks use Google Chrome as their primary browser. I used to, but Apple beefed up Safari in their latest version of OS X (El Capitan) to the point that I feel comfortable using Safari my primary browser now. I still do development work on Firefox, a popular free and open-source browser available on many operating systems, including the ones mentioned in the Google blog entry I referenced. If you’re dead set on staying on Windows XP, you can switch to Firefox and still do what you need to do.

But I wouldn’t really recommend it.

As a young geek I was always thrilled with the release of a new or updated operating system. I wanted to see the new graphics, the different approaches, the changes in paradigm. What new goodies would be lurking at every point and click as I moved around after a fresh update. Often times I would join into beta programs so I could help with the testing. I was even a pre-beta tester on Windows Vista (after that statement I always say, “I’m sorry”), but as I grow older and my expectations of how a computer should work become more solidified, I am cautious about upgrades today. I didn’t upgrade my work MacBook Pro to El Capitan until I was absolutely sure that everything would work. I take the same approach with my home computers and with Earl’s MacBook. I still upgrade, primarily for the security benefits and because it’s the most supported way to go, but I’m cautious about it. We have about six different ways to backup computers and mobile devices in this house. It’d be great if I could get all participants to participate.

While there are usually many bells and whistles associated with a software upgrade, there are also security upgrades that should be strongly considered. These security upgrades help keep the bad folks out of your hard drive. Yesterday I was disheartened to see that my medical records at the doctor’s office are still being maintained on computers running Windows XP. Windows XP is not really supported by Microsoft anymore, leaving these things open to new viruses and other types of nasty attacks. Ransomware is quite popular; your files are remotely encrypted by a nasty organizationthey send you a message that you have to contact a phone number some place and demand that you pay a ransom to decrypt your files. By the way, don’t ever respond to that sort of thing, just consider your files lost and go to your latest backup because you are backing up your files on a regular basis, correct? I’ve had relatives get caught with this sort of thing; they are now running Linux on their rebuilt laptops because Linux is much more impervious to that type of attack.

Part of the driving force of software upgrades is marketing. New software usually requires a faster computer and if you’re starting to fall behind the computer hardware curve, it may prompt you to get a new computer so you have the latest and the greatest. Earl’s MacBook Pro is about there, I don’t know how he chugs along on his six year old laptop with degraded trackpad quality. I don’t particularly like the idea of tossing a computer because the software has become outdated on it; we have a computer built in 1996 running the clock system wired through the house and it is working perfectly fine.

However, if you’re running Windows XP or Vista, you should really consider moving on to a better computing experience. At the very least you’ll still be able to securely run Google Chrome on your desktop.