I am fascinated by the New York State Historic Newspapers archive (nyshistoricnewspapers.org). The archive has scans of numerous newspapers dating back to the early 1800s. Every issue of the two newspapers that were in my hometown, The Pulaski Democrat and The Salmon River News, are available in this archive. Full text searches are available. The interface is quite nice and easy to use.

I have been using this archive to research the airports in the area of my hometown, as well as the building of Interstate 81 and the reconstruction of many roadways in the area. For example, I always wondered why “Confusion Corners” was named as such; it turns out that the intersection of (then) US Route 104 and NY Route 104B was poorly marked, contained a lot of medians in the middle of the roadway and generally created havoc for motorists when it was opened in 1950. There were also several car related fatalities in the area. I had always thought that the roadway was built in the 1960s, but it turns out Confusion Corners was born in 1950. It had a similarly designed, but not as busy sibling at the other end of NY Route 104B, where it intersected with NY Route 3. Both of these intersections have been reconfigured to a standard intersection as of sometime in the 1990s.

After searching around about airplanes and roads, I started looking up the history of various family members over the years. I found an interesting article about my paternal grandfather’s poultry farm, which was awarded by Niagara-Mohawk (the local power company at the time) a mercury vapor light to illuminate the yard. Apparently the farm had a lot of electric equipment and the power company was quite grateful for this consumption, so they award the farm a light. 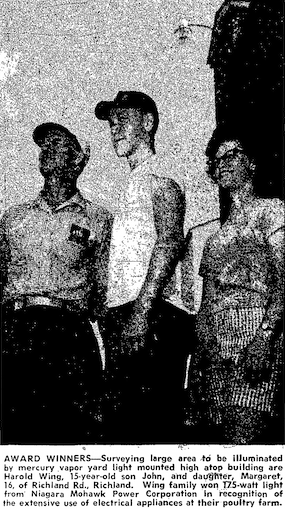 A smaller farm down the street also received a light for their yard. My grandfather is quoted in the article that accompanied the photo as having a friendly competition with the other farm and that first and foremost they were neighbors and friends.

The photo and article have such a technology-progress vibe so typical of the 1950s and early 1960s to it. I get a kick from the “looking forward” ambiance of the photograph. It reminds me of another photo I found in an archive years ago, where two women, in their 1950s dresses and high heels, are standing under high tension wires in the Finger Lakes, gazing up at the towers carrying the electricity overhead.

It was such a different time back then. 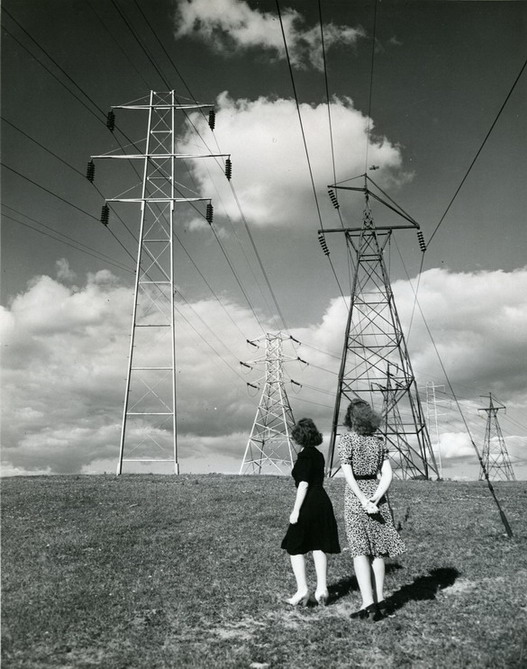