Adirondack Central School District has decided to implement “Incentive Raffles” for students taking state mandated exams. ACSD is about 30 miles from us. 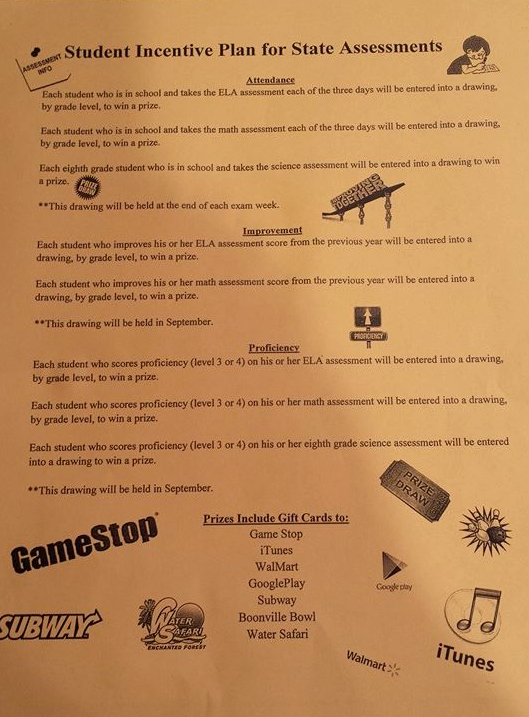 As mentioned in the newspaper opinion piece linked above, the school is essentially bribing their students to participate in the standardized exams. I have no children in any school district, so I don’t really have a vested interest in this, but I can’t help but think that bribing students with prizes simply to take a group of tests can’t be a good thing for the public in general.

When I was in school (I graduated 29 years ago) we had standardized testing as well. In elementary school we took the “Iowa Tests”. There are only two things that I remember as being remarkable about the Iowas: it was the first time we colored in the dots on a scan sheet for scoring purposes and when we got to the end of the section for our grade, there was a very accurate STOP sign graphic signaling where the test ended. I didn’t feel emotionally scarred by having to take a standardized test. I don’t remember it phasing me in any way; it’s what we had to do.

As an adult do I agree with standardized testing? Absolutely not. I think the whole Common Core program and the endless barrage of scripts and mandates and the like are ludicrous but then again, I think that the thought that EVERY student that graduates from high school is automatically going to go to college is idiotic as well. Not every person is wired to go to college. The latest approaches to education in The Empire State focus too much on trying to make every student fit into the same ideal. There’s no room for creativity, on the behalf of the teacher nor the student. Follow the script, take the test, move on. I really am against standardized testing.

But this is the direction that our education system is headed today, just like when they got rid of “Algebra”, “Geometry” and “Trigonometry” when I became a freshman in high school and they replaced it “Course 1”, “Course 2”, and “Course 3”. Did I have an interest in every subject I had to take? No. I couldn’t care less about “Afro-American” (a Social Studies course) but I still took the course, for the most part did what was expected of me and got through it. The “bribe” in all of this was my success. I did what I had to do to succeed. This should be the rewards. Not game store cards, not iTunes cards and certainly not food. Is the school going to give them a biscuit when they sit on command?

In a society that seemingly gives child a reward for remembering to breathe and refraining from not soiling their pants in the middle of a restaurant (and if they do poop, they still get a reward, because, well, just because), how are students going to cope with life once they’re outside of their little world full of bribes, goodies and prizes for routine, mundane activities?

Yes, I think this whole standardized testing thing is ridiculous, but Adirondack CSD is approaching this in completely the wrong way by having door prize raffles simply for attending what should be a required activity. Example #71823 why I think the world has completely lost its collective mind.