This morning I stumbled into the kitchen all groggy and blurry-eyed, in search of a glass of water. I just needed one glass of water and I would feel better. I’m not much of a coffee person and I tend to drink iced tea in the afternoon, and because society frowns on beer for breakfast, I just wanted a glass of water.

I noticed that there were a few dishes stacked in the sink. This is odd when I’m around because I do not enjoy dishes in the sink. Dishes in the sink make me crazy. Not as crazy as when I find garbage in the sink, but moderately crazy. I don’t bay at the moon or anything, I just get surly, unless I’m in search of my first glass of water in the morning, then I get surlier.

The dishes in the sink meant two things. A certain someone might or might not be home for a few weeks before he heads off to college in a city that may or may not be windy. It also meant that a certain someone of the married persuasion dared not open the dishwasher because something hideously awful could be hiding in the dishwasher. 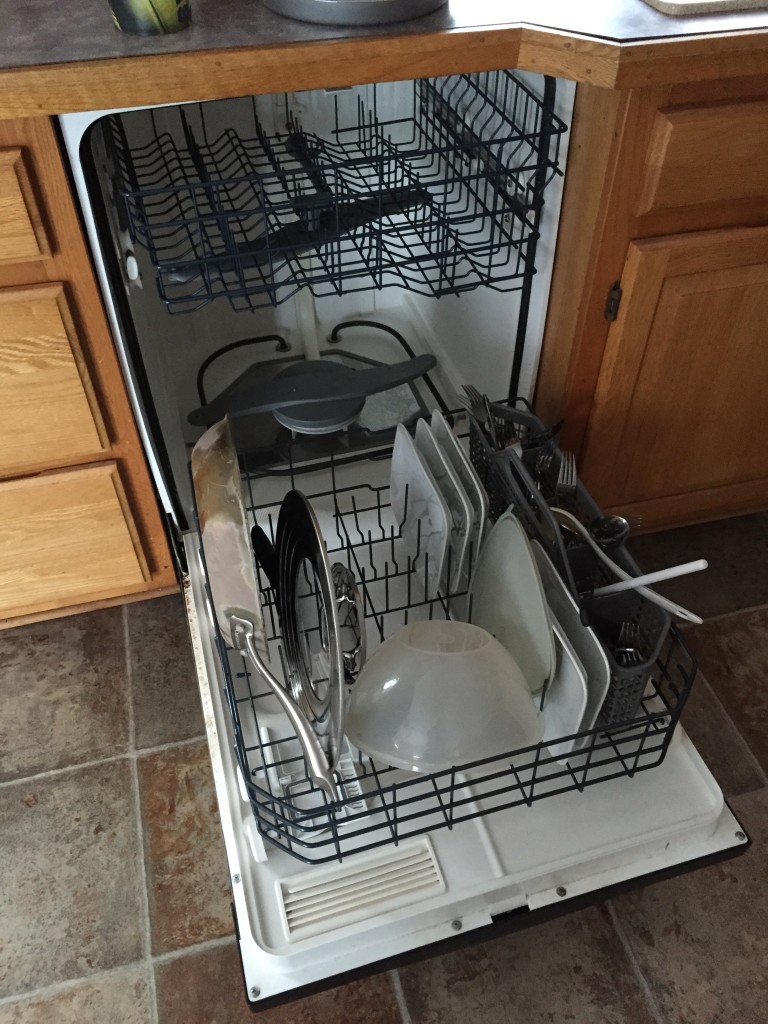 Now, I know that clean dishes ranks right up there with “whites in the dryer” in the frightful department. I know that sinking feeling when you steal a glance at the dishwasher and you see the “Clean” light illuminated. The feeling of dread has been eased slightly with the march of technology; before the days of the “clean” light there was the “bounce sound” of the detergent dispenser in the dishwasher, its ringing out a startling announcement that the dishes in the dishwasher needed to removed and put in their proper place in the various cabinets that adorn our kitchen.

I’ve never figured out Earl’s system for where the dishes go. The glasses are to the right of the sink when I expect them to be to the left. There are round plastic tubs in one cabinet and square plastic containers over the Radarange microwave because apparently one heats up stuff in a square container but not a round one. The Pyrex bakeware is filed next to barbecue sauce and the brown bakeware is next to the bread machine. Cookie sheets go under the stove unless they’re used for something else then they go on their side next to the Bundt Pan.

The one that might be going to college where it’s windy and the one that could have marital ties to me both avoided the dishwasher during their travels and treks across the kitchen. That is when the fear totally gripped me and I realized that it was 2015 and to stay true to one of my goals, I must face my fear square on and do something to conquer this fear once and for all.

I emptied the dishwasher.