The origami case I recently purchased for my iPad has to be one of the best purchases I have made for an Apple device. This case allows me to store and efficiently use a full-sized Apple keyboard with my iPad, and it all fits on a snack tray on a CRJ-700 whilst flying Mesa Airlines doing business as United Express. 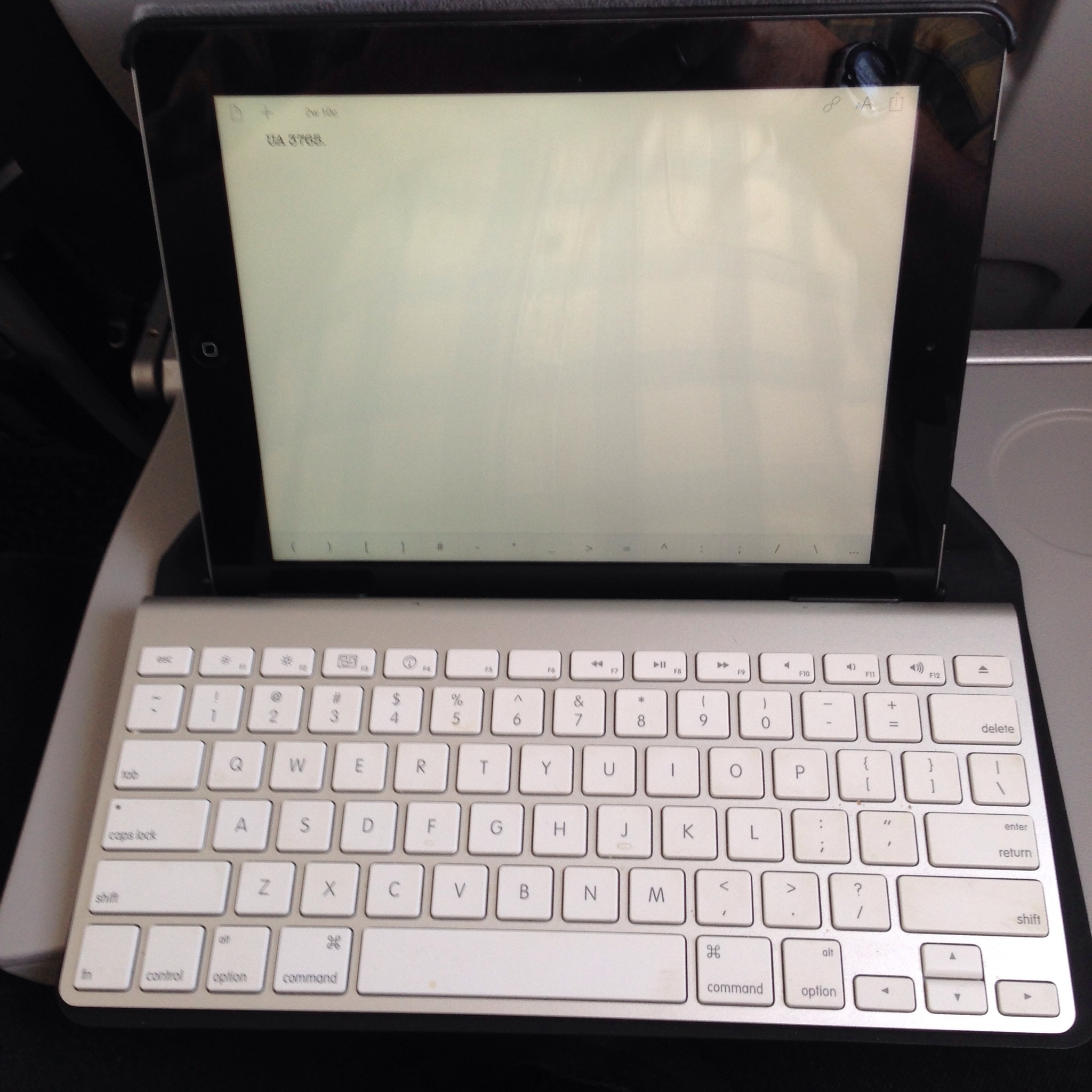 The smaller things amuse me.

We were about 45 minutes late for takeoff on the second leg of this trip; a computer responsible for “making the dinging noises” in the cockpit wasn’t doing its job, so they had to replace the computer. This involved going back to the gate, having maintenance come on board, swapping out a module and then rebooting the airplane. All in all the fix took about 15 minutes once maintenance was out to the aircraft and then we were on our way. Folks on the flight were good natured about the delay. This isn’t a full flight. Earl moved across the aisle to a pair of empty seats so we have lots of elbow room.

I’m wondering if this flight is using the traditional Victor Airways for navigation instead of going GPS direct, because we just jumped in line with four different aircraft flying in the same direction at differing altitudes. This is very cool to me. As a student pilot, I’ve flown a Victor Airway on just a couple of occasions and I’ve only seen one aircraft within reasonable eyeshot when on that Airway. It’s kind of nifty being on the highways in the sky. The aircraft closest to us the flight we are currently on is close enough in that I’m able to identify that it’s an American Airlines flight with the new livery. 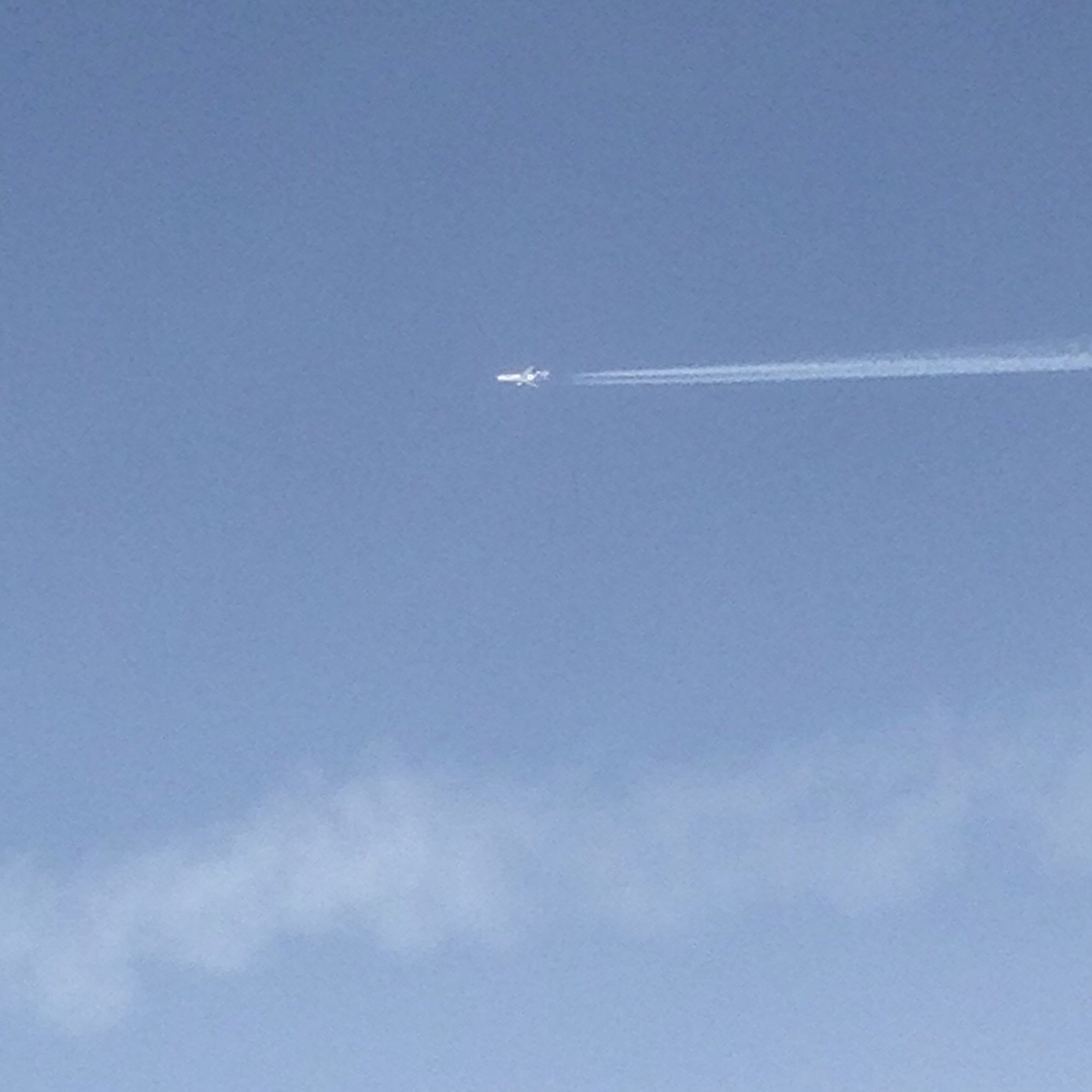 I’m excited about our trip to Kansas City. Even though Earl and I will be working for a couple of the days there, the change of scenery and new experiences will be quite enjoyable.

Earl and I are on United flight 4583 from Syracuse to Dulles. This is the first leg of a two leg trip that will eventually find us in Kansas City later this morning. Our flight attendant’s name is Kyle. He is on Twitter. I’m good like that.

Our flight left at 0600L this morning and we were right on time. The captain advised the passengers that there could be a little choppy along the flight but it’s nothing thus far.

I am always like a kid when I’m flying, even as a passenger on a commercial flight. My head is plastered against the window and now that I’m allowed to, I take many photos. I don’t feel sorry for those that see flight as a form of transportation, but I consider myself quite lucky to experience awe, excitement, wonder and beauty every time I’m on an airplane. Sometimes I believe that the U.S. Security Measures are designed to make the flight experience as miserable as possible, but once you’re through that theatrical mess, they are left behind and quickly forgotten. I’m too overwhelmed by the amazing experience of flight, even as just a passenger, to be bothered by such things.

I just remarked to Earl that maybe I should be one of those old guys that becomes a pilot for a regional airline late in life. It doesn’t pay much and it’d probably cost more than I could ever earn, but flying everyday would be such an awesome thing. My current plan is to become a flight instructor and enjoy flying the two of us around in a Cherokee 180 or something similar. I want to see the land from the sky as often as possible and I want to share my passion with anyone that wants to share it with me.

I don’t know how people can sleep on flights. There is so much to see, so much to feel and so much to experience.

Life can be such a beautiful journey.