I was slated to fly the club airplane to KSCH, or Schenectady County Airport, this morning. The plan was to have me drop off the airplane at the maintenance facility on the field and another student and instructor would pick me up and fly me back home. As a student pilot that has soloed, I am allowed to do this sort of thing with the proper endorsements in my log book. I just can’t take passengers along with me.

I started planning the nearly 70 mile flight last night, with the intent of completing the flight plan this morning once I got the relevant weather information.

I’d show you a picture of my flight planning work here but for some reason Apple has decided to stop syncing my camera roll and photo stream on my iPad. It probably has something to do with iOS 8.

Edit: The picture just showed up on my iPad after turning my iPad on and off and then disabling photo stream and re-enabling it.  There was a message about “Photo Stream (beta)”, but the accompanying message with the suggestion was so dire that I decided not to risk it. 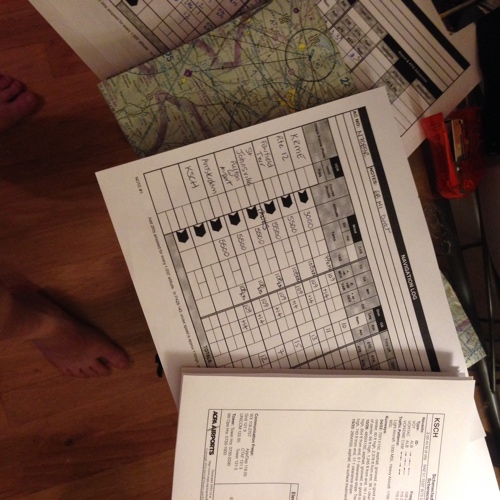 This morning I received an email from the club maintenance officer who decided that perhaps the airplane shouldn’t go to Schenectady, so my flight was canceled and I am sitting on the ground working like a good soldier today. While I understand the motivation for canceling the flight, I was a little bummed because it turned out to be a beautiful day to fly and now the club airplane is in for maintenance so I don’t have any airplane to fly. Well, it’s not actually maintenance, it’s an inspection.

Earl and I are traveling next week so the timing of the airplane inspection is almost on the money. I plan on flying a lot when we get back because it’ll be crunch time to ready myself for my checkride with an FAA examiner.

After I pass that I’ll be able to take passengers.