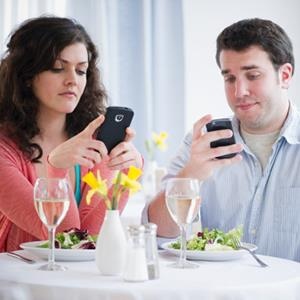 Earl and I went out for lunch this afternoon. This not out of the ordinary for us, especially during the weekend. The experience was enjoyable. Our restaurant of choice was a local diner that is open until only 2:00 p.m. on Sundays. Luckily, they still offer the lunch menu; many diners or family restaurants in the area serve only breakfast on Sundays. I find this disappointing as I’m not a big breakfast-food kind of guy.

Lately I have been making a conscious effort to not use my smartphone in anyway when sitting in a restaurant. Well, I should take that back. When seated for a meal, I will tell Earl that I’m checking in on social media and then I’ll set my phone on the table, face down. Outside of taking a photo or something, I consider the phone off limits until we are ready to leave.

This smartphone approach has afforded me the opportunity to enjoy the company of others at the table and to observe the activities in our immediate area of the restaurant. As an avid people watcher, I have to admit that I’m always curious to see others in their natural habitat.

The first woman I noticed was younger, I’d guess somewhere between high school and college graduation. She was dressed casually and had joined a table of seven others. I guessed they were family. The vibe from the table was that it was some sort of “catching up” scenario; the snippets of conversation that permeated the atmosphere of the diner included questions about travel and college.

The reason I noticed this woman was because when she was served her pancake breakfast, she busied herself by demonstratively cutting up the entire stack of pancakes into a small, bite sized portions. All three or four pancakes on her plate were chopped up in this manner. Her cutting motions were large, in fact, this is what originally caught my eye. I remarked to Earl that it had been a long while since I saw someone cut their food up in a restaurant in this manner; he asked if there was a toddler at the table as it sounded like she was cutting up the pancakes for a four year old or something. No, she was cutting up the pancakes for herself. This type of table habits run directly contrary to anything I was ever taught, read from Miss Manners or witnessed on “Downton Abbey”. Granted, at one time in my life I held my fork like a shovel (it was several decades ago), so I’m really not an authority on table manners, but her approach to eating, which was repeated with the sausage and other extraneous meats on her plate, struck me as quite odd. The baby approach to culinary manners did not match the air of young adult that she was trying to portray. I found this humorous.

I did notice that between her portion-controlled bites she would glance down at her lap. A shift in my gaze confirmed that she had an iPhone 5C (in mint green) sitting in her lap. Apparently, something in cyberspace was more important than the family gathering that I was observing.

Earl and I were chatting about how our waitress resembled Vera from “Alice”, Earl was happy she didn’t fling straws all over the place, when a couple a few tables over caught my gaze. Both were older; if I had to guess I’d peg them in their mid 60s. They appeared to be married, but for all I know they were having an affair that spanned decades, but my money is on married. The reason I’m thinking they were married is because they weren’t, at least to my knowledge, interacting with each other in any way. Before the food arrived, while they had food in front of them and after they had finished their meal, they were both engrossed in their smartphones. Casual observation confirmed that the man had an iPhone 4S or older and the woman had an iPhone 5 or newer. They were both so involved with their iPhones that they didn’t even look at each other. When the food was delivered, while they were perusing over the menu, their gazes barely ever averted from their smartphones and at each other. Earl suggested that perhaps they were texting each other, but I don’t think that was the case.

These observations were made by my casual glances and such. Earl and I continued a lovely discussion as we enjoyed the moment in that little diner together this morning. I’m happy to be in a place where I still enjoy the company of those I spend time with and putting my smartphone down on the table, upside down and outside of my peripheral vision, confirmed that the best moment is the moment enjoyed in the here and now.