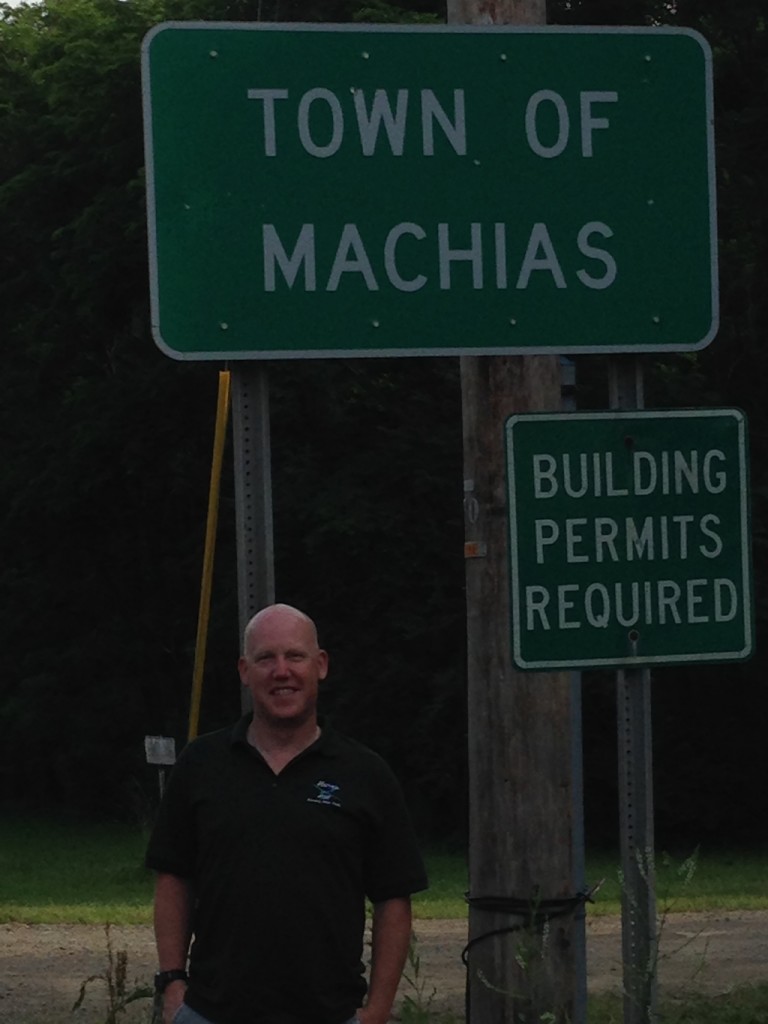 So today I turned 46 years old. In a way I can’t believe that I have reached this age, because I can easily recall being an adult and remembering my parents at this age. Even odder, the character Maude, played by Bea Arthur, was this age when the series started and for goodness sakes she just seemed old. I don’t feel old. For the most part I feel great. Earl says my life is still revving up for the crescendo. I think young.

I’ve had this blog for nearly 13 years and I don’t think that on this blog I’ve ever discussed the origins of using a derivative of “Machias” as my screen name in various places. I’ve had some locked down blogs over the years where I talked about it, but never here in my wide-open view blog. Since at age 46 I don’t really give a crap as to what people think anymore, I thought I’d tell the story.

It was January 1991. I lived in the southwestern corner of New York state in the small city of Jamestown. I was single at the time, though I lived near the boyfriend I had from ’87 to ’89. I was dating a guy at the time who I thought was way out of my league, because I didn’t think I was attractive and he was pretty good looking. (I’ve stalked him on Facebook and he didn’t hold up well). I was flat broke and barely making ends meet by working part time at the local Hills Department Store and also working for The Resource Center, one of the county chapters of the Association for Retarded Citizens that could be found all over the Empire State. I thought things with the guy I was dating was going fairly well though I felt unsettled and like I was drifting through life in general. I didn’t feel that I could ever be what I really wanted to be, mostly because the gay thing, and I bought into the stereotypes of the times of what gay men should do with their lives. I had also attended the funerals of too many of my friends back in Boston (due to the AIDS epidemic) and frankly I was retreating back into my shell.

I had $20 to my name. Pay day was a day away, but I could float a check if I had to. It was my day off and I couldn’t find the guy I was dating to see what he was up to. My car was running like crap but I decided to go of a drive and grab some lunch at McDonalds because my cupboard was bare.

I was sitting in the drive-thru at Big Foote McDonalds (named after the street it was on) when there was apparently some hassle in the drive-thru, the woman at the register was mixing up orders. When I got to the window, she told me the guy in the car in front of me had my order.

Now, I had noticed this guy because he was making out with another guy in the car back between the speaker and the window and I thought that was rather racy for the little city we lived in. I could see the driver, a very attractive redhead but I couldn’t see the details of the other guy other than I could tell that he was a guy (no boobs).

The guys in the car in front of me figured out they had the wrong order and both got out of the car, one to the window where I was parked, the other headed inside. The one with my order was the attractive redhead; the other going into the restaurant was the guy I was dating. Both realized who I was and kind of frozen.

I stammered a thanks for giving me my food and told them I didn’t want to talk. I don’t know if the woman at the window realized that she was watching the Gay Peyton Place or not, but I got my food, stammered like I usually do and headed out. I gobbled down my food as I drove and decided to go for a ride. With probably $15 in my pocket and maybe a 1/2 tank of gas, I’d drive to Buffalo and back. The long way. In January. Little did I know that the forecast was calling for heavy snow.

I wound my way through the hills of the Southern Tier, still cranky and very unfocused by finding out that I wasn’t good enough for this guy after all and was heading up Route 16 near Arcade when the snow as becoming way too much for me to handle. I decided to head home after putting $10 of gas in my car; hopefully I’d make it from the middle of nowhere to the middle of barely somewhere.

I could barely see and was moving at around 15 MPH, snow swirling all around and the roadway very slippery, when all of a sudden there was a cow standing in the middle of the road. I jerked the car to the right and was thankful to find there wasn’t a ditch but there was a snow bank and some soft ground. The cow ran off laughing; I sat there spinning my tires. I wasn’t going anywhere.

Completely unprepared for inclement weather, I got out and looked the situation over. The nearby house had no sign of life. The snowbank was piled high and the road was no longer visible. Trying to decide what to do, I noticed a pickup truck coming down the road. He slowed his crawl down even further when he got to me. I looked in and could see what appeared to be a big guy wearing a black leather jacket. He had a gun rack in the back with one gun.

“I’m dead”, was my first thought. A few months earlier, while working as a programmer at a manufacturing plant, I had been told by a co-worker that if we ever met outside of work that he’d derive great delight by shooting me between the eyes. This scared me to the point of quitting the job without any notice to the company at all; I just abandoned the gig.

He jumped out of the truck and walked over. He was 6’1″ or so, black leather jacket and gloves. He was wearing jeans and he had a baseball cap on. He had one of the most magnificent black beards I had ever seen.

“Havin’ trouble?”, he asked. He seemed friendly enough and thankfully the gun had stayed in the truck.

“Yeah, there was a cow and I tried to avoid it…”, I went on about my predicament.

His demeanor made me very comfortable, though I couldn’t explain why. I had a feeling that he might be gay but he didn’t fit any of that which I expected from gay men, and besides he had a gun, so I just thought my mind was falling out of my head.

He hooked up the chain and spun his truck around. He told me to gun it in reverse when I felt the tug. It was just a few minutes and the car was out and back on the snow covered road.

He came back to the car and we unhooked the chain. I thanked him and offered him the $5 or so I had left in my pocket. He declined and said, “No problem. Watch out for the cows! You’re lucky you didn’t hit that!”

He gestured to where the car had gone off the road and while doing so he said, “You’ll never forget Machias!”.

When he said that word, “Machias”, a gong went off in my head in a way that I just can’t describe. I still get chills when I hear that word. I don’t know if I was called Machias in a previous life, I don’t know if some angel or spirit guide is named Machias or what, but I know that it’s a word the resonates with my soul in a very, very positive way and by him saying that word, I no longer felt afraid of this man.

“Well thanks for your help.”, I shook his hand.

“I’m John, thanks again”. And off he went back to his truck with the gun.

A few months later I was DJing at one of the gay bars in the sleepy little city. I looked out over the bar and saw a tall man with a magnificent black beard walk in. It was warmer; the leather jacket was open. He grabbed a beer and was looking around when he spotted me up in the DJ booth. I looked down quickly, he walked up to the booth.

He pointed at me, grinned and said, “Machias.”

The soul resonating gong went off in my being again, and I said, “it’s John, but yes, Machias.”

We made small talk that started off with him asking if I found anymore cows in a snowstorm. During our conversation and a few romantic gestures of kissing and the like the DJ booth, I realized that Larry was just being himself and wasn’t trying to conform to any sort of preconceived notion of what it was like to be gay. I admired that greatly about him and though I didn’t know him at all and never saw him again after that night at the bar, he really changed my path. It wasn’t long after that that I found a new job and started getting my life back on track again. I know that he was a strong man, I know that he was great kisser and I know that he wasn’t afraid to go after what he wanted. Other than that, for all I know he disappeared into the ether.

So when I hear the word Machias, it’s a reminder to just be myself and not be afraid of my place in the world. And it still resonates with my soul in incredible ways.