So I have a little bit of a confession to make. As I’ve mentioned on here before, Scooter moved in with us at the end of January. We don’t know much about what Scooter did before he ended up in a friend’s barn over the winter, but he seems to have had a few adventures. He has a skittish side and he has some habits that indicate that he lived outside for a long while, for example, he still gobbles his food down at an alarming rate.

I have been concerned that Scooter is lonely here. He often seems bored and when he’s bored he gets into all sorts of mischief. If there is a door between us and him he is very loud about his discontentment with this. He is still learning the basics of staying off of kitchen counters and the table.  He’s still figuring out how sleep works in that if he’s not screaming about our bedroom door being closed, he’s ramming around the bed at all hours of the night and trying to leap onto as many elevated surfaces as possible.  Last night he ran up and down the piano keyboard a few times. I couldn’t figure out the tune.

During a particularly frustrating moment I decided that he wasn’t very happy here and I thought about finding him a new home. I even put together an ad for Craig’s List. While I read over my description on the “review” screen before submitting the ad to the popular site, I looked at the photo I had selected of him and found that I just couldn’t do it. I don’t give up on people and I’m not a quitter, so I certainly wasn’t about to give up on Scooter. I found myself misty-eyed and I deleted the ad before submitting it. It was at that moment that I decided that the latest feline in the family had won my heart and that we would have to come to an understanding.

Yesterday I installed a sleep mat for him near my desk in my home office so he could relax while I worked. His new vantage point allows him to keep an eye on the proceedings. Yesterday morning (before the bad weather moved in) I gave him some outdoors time so he could engage in his spring fever ways. Last night’s sleep cycle was good, but not great, but it showed improvement. Last night when I mentioned to Earl that I had contemplated the Craig’s List maneuver, I was scolded for thinking of such a thing. He’s still get used to us and we’re still getting used to him and that’s all there is to it.

I guess we still have some mutual training to do. But I’m not giving him up and I wouldn’t trade him in or exchange him for another.  And that’s something for everyone to purr about. 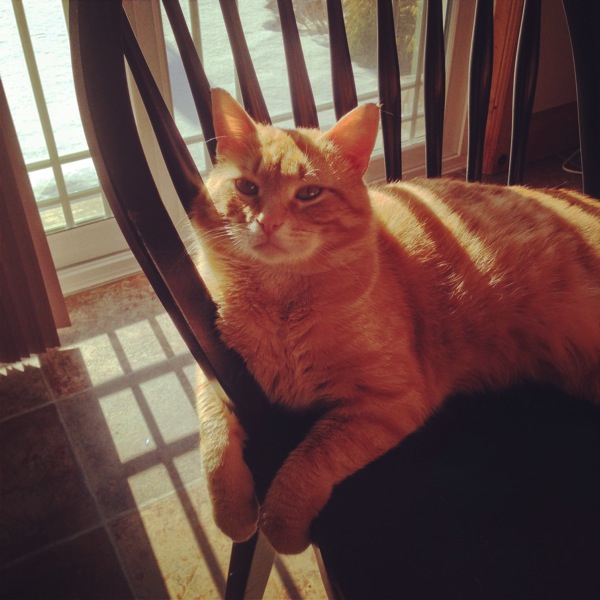