Since taking my first flight lesson back in November I have logged just under 13 hours of flight time as a student pilot. That doesn’t seem like a lot of time unless you a consider the fact that I am learning to fly in the winter in Upstate New York. If I was to learn in a warmer climate I’d probably be up around 20 hours by now. I often have to remind myself that I’m lucky to be able to fly in the winter at all; my dad and grandfather always had to wait until the snow was gone and the grass strip was functional before they could fly. We take what we can get.

My flying endeavor has consumed me in the best way possible. Nothing has consumed my time and energy more than flying, save for my marriage. Luckily, both my flying and my marriage are pure bliss, so I can say without hesitation that my life is awesome.

Co-workers ask about my last flight, conversations with my mom and sister include my flying lessons and on Saturday, when Earl and I were on a ride to the Southern Tier, I randomly barked out that I figured out a way to remember which way to turn the trim handle in the Piper Cherokee to trim up vs trim down without looking at what I was doing (up until now I’ve always had to look). I talk about flying a lot. I dream about flying. Airplanes have always been a part of my dreams but now they’re almost a non-stop element of my dreams and always in a good way. Last Monday night, after my first night flight, I could barely sleep because I was so excited about the flight I had just been on. 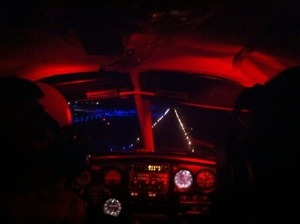 Life is meant to be exciting.

Up until a month or so ago I worried about the fact that I was consumed with becoming a pilot. I was concerned that I no longer cared about building an awesome Linux computer or that I didn’t feel the need to add another clock to my school clock collection. All of my energy outside of work and home has been focused on flying. Am I boring to talk to? I don’t think I am, not anymore than usual. I hope that when I speak about my passion of becoming a pilot, folks will see a sparkle in my eye or hear an excitement in my voice that portrays the way I feel. Because I can’t say it enough: flying is awesome and I am a very happy man for finally starting the path to become a pilot.

There’s a saying about old dogs learning new tricks and the like. The truth of the matter is, I don’t feel like an old dog learning a new trick. I feel like a young playful puppy that looks in the sky with a feeling of wonder, amazement and excitement.

And it’s a great feeling.