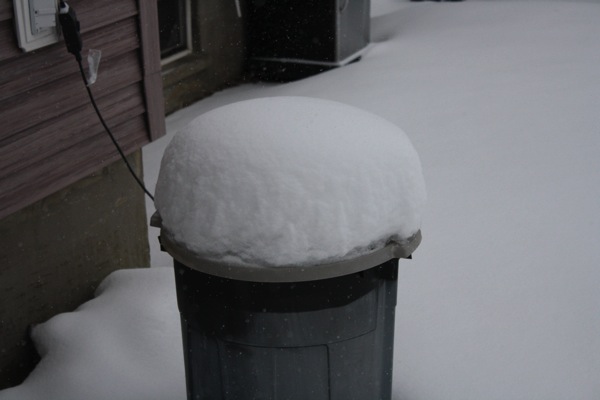 So it has been 2014 for over 36 hours in these parts and there is much rejoicing in the land. We’ve been watching snow lightly fall since the New Year arrived. We have about a foot of snow on the back patio at the moment. We should have another foot of snow by this time tomorrow.

Suffice it to say, I’m not going to be able to fly for my next lesson this afternoon.

I don’t mind the snow but I do mind all the hysteria that surrounds it. I complain about this often and sometimes loudly, but I don’t remember the general population being so terrified of snowstorms back in the day. It was rare for school to be closed, we usually ended up with an early dismissal, and it was unheard of for a school to close the night before, but that’s common place now.

This morning I listened to the local radio station on my drive to the gym and the newscaster was telling everyone to stay off the roads today due to the snowstorm. She then said four inches of snow were expected. She encouraged listeners to call 911 if they felt they were in danger.

Now, I’m all for calling 911 if you’re in danger, but unless you’re a complete tool, I don’t see how one can get stranded in four inches of snow. Four feet of snow, I can see, but four inches of snow? Drive through it. If one uses common sense and prepares by having a hat and gloves and boots and a blanket and a bottle or two of water in their vehicle, and they don’t drive into what is obviously a dangerous area, chances are pretty good that you’re going to be able to make your commute just fine.

In fifth grade I remember being stuck at school until nearly 5:00 p.m. due to a snowstorm blowing through. (I remember being excited about the fact that I was see the classroom clocks at “5:00” since I had never seen that before and I have always been a huge geek). One by one the buses would come back from the preceding high school run, the principal would announce the bus number over the intercom and a few more students would be able to leave. Since we lived away from town and our bus went to the outer reaches of the district, bus 53 was one of the last buses to get called. We survived the ordeal just fine and we got home just as Dad was getting back from his day at the store. There were no hysterics. Mom was a little worried but she wasn’t a sobbing mess or anything. Common sense. That’s all that’s needed in these situations.

There doesn’t seem to be a lot of that anymore.