Back in 2007 I was looking out in the woods behind our house. It was spring time and the leaves were just starting to pop out. Being comprised primarily of maple trees and a lot of underbrush, it wouldn’t be long before the leaves and other greenery would fill up the woods. The season wasn’t quite there yet when I gazed in the woods so that’s when I had the opportunity to spot the little evergreen tree.

Obviously spawned by the evergreens several hundred feet farther back into the woods, this little guy had found himself in the thick of the maple trees and the greenery. He wasn’t quite “Charlie Brown” material, but it was obvious that he was struggling with holding his own during the summer months. I sensed that given the right amount of light and TLC, he could thrive and be a big strong tree. At the time he was about two feet tall.

I dug a hole in the middle of our yard near the garage. It was a nice deep hole with plenty of room for the roots that I knew would come along with the tree. I had never transplanted a tree before, but I hiked across the little creek the runs behind the house and dug in a big circle around this little guy. I gathered up as much of his native dirt that I could, tried to keep all his roots intact and after crossing the creek with him in tow, I planted him in the newly dug hole in our yard. For several weeks I watered him regularly until I was sure that he was holding his own. That first Christmas in his new home, I decorated him with a set of miniature Christmas lights. There were only 50 lights on that set but it was plenty.

The next year he was taller and we upgraded to 100 lights.

The third year it was obvious that he had grown some more and we added more lights to accommodate. I didn’t really pay much attention to the fact that we were decorating the tree every year, after all he is an evergreen tree and when we decorate outside for the holidays, we decorate the evergreen tree. But that was the year that Earl was stopped by one of our neighbors. It’s rare that we speak to the neighbors, we’re not in that type of neighborhood really, but she stopped Earl to let him know how much her family loved that we were decorating that tree each year. Looking out their back patio door, they had a perfect view of the ever growing evergreen, and seeing lights out their back window carried the intended Christmas spirit into their home. It’s good to share the spirit that way.

A couple of years ago I let Earl know that we would need to buy more lights for the evergreen tree. He’s been thriving over the past 18 months and we just didn’t have enough lights to do him justice for the season. We purchased two new big spools of lights and last Sunday I decorated what has become my favorite evergreen tree on the property. He’s over eight feet tall now and he’s doing wonderfully. This evening, when we pulled into the driveway after a most excellent gathering with some dear friends, a flash of motion caught my eye as I saw the neighbor looking out her patio window at our tree.

Our little evergreen is growing more beautiful and stronger every year, and apparently he continues to delight all during the holiday season. 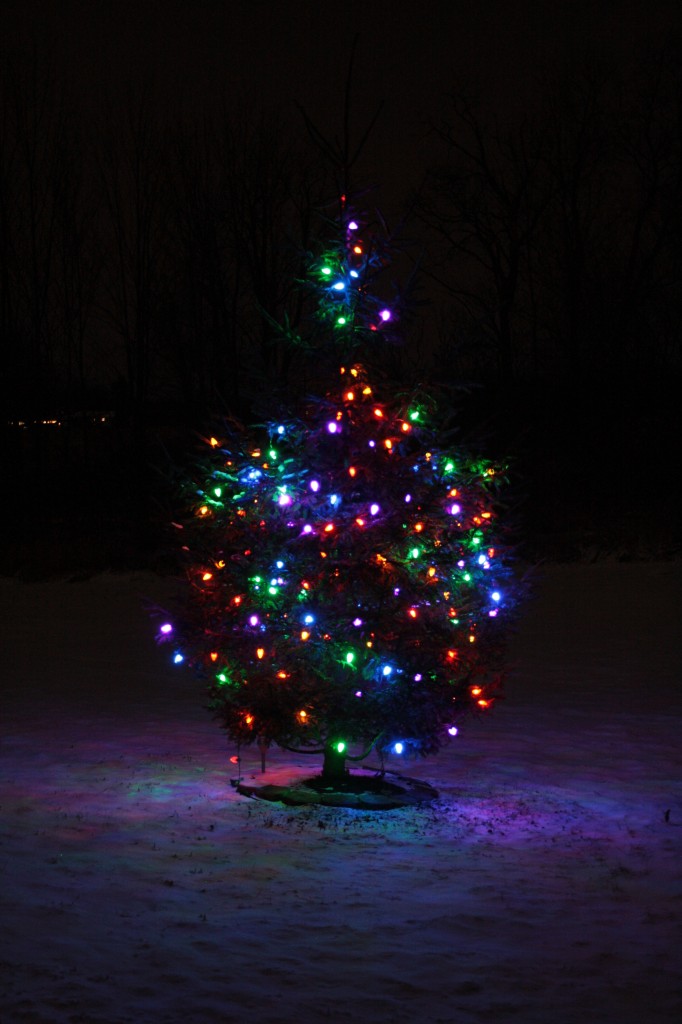