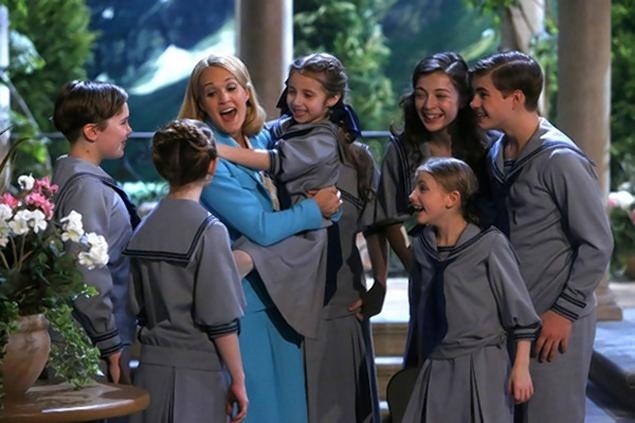 So if you were following my Twitter feed on Thursday night, you probably noticed that my contribution to the Twitterverse blew up starting at 8:00 p.m. (7:00 p.m. Central) in tandem with “The Sound of Music Live!” on NBC. In a way I was excited to see what NBC would do with this perennial classic, but another side of me was wondering why on earth they were trying to redo another perennial classic. Because I have a brain made of Swiss cheese, I had forgotten that it was on until Earl was flipping through channels on the television in search of “The X-Factor”. I suggested we watch this exciting live performance.

I was kind of snarky on Twitter during the presentation. Ok, I was probably more than “kind of” snarky, but the truth of the matter is, I was smart enough to refrain from posting the very inappropriate joke I made about “The X-Factor” when Earl and I decided that we needed to flip away from “The Sound of Music Live!” for a little while.

On Friday there were a bunch of people posting bunches of things about “The Sound of Music Live!” and I added my two cents to the discussion. I think this conversation was taking place on the CNN site, but it basically boiled down to this:

1. The sound mix was horrible. There was this ridiculous hissing throughout the program and I firmly believe that technology today is at a point where we should be able to get the hiss out of the sound mix before going live before millions of viewers.
2. Audra McDonald was phenomenal.
3. Carrie Underwood can certainly sing but her acting was so wooden that it was making me uncomfortable.
4. In some scenes the costume choices were quite odd. Looking at the photo at the top of this entry, you’ll notice that Maria looks like she’s singing to the children before the dash off to join her on her latest TWA flight.
5. The fact of the matter is, you either have the chops to pull off a live performance like this or you don’t. Honestly, while Carrie sounded lovely and I’m sure she put all of her heart into her performance, I don’t know that she was ready for this live play on television experience.
6. Overall I was happy that NBC tried something different and I was hoping that they would do it again sometime.

Now, a couple of folks have sent me emails telling me that I am a horrible man and who did I think I was for writing such horrible things about “The Sound of Music Live!”.

First of all, I think it’s extreme to call me a “hater”. Those that called me this pointed out that Carrie and the rest of the cast should never be compared to a Broadway show because on Broadway they have months to prepare and apparently the cast had a week (after the set was completed). Well, I’m sorry, but that NBC’s fault, not my fault. If you’re banking your Thursday night lineup on remaking a definite classic in American theatre, well, you better have your stuff together and not give yourself just a week to prepare. That just shows a lack of commitment to the production.

Secondly, I’m not the only one that thought Maria turned into a flight attendant in some sort of weird time warp of the show.

Third, I was attacked on several occasions about the play being based on “the original music, not the movie!!!!!” (with multiple exclamation points). Fair enough, if that’s the case, why was “Something Good” included in the musical numbers, when that was a song written for the movie?

And lastly, I think that someday Carrie Underwood may certainly win some sort of theatre award for her acting. I just don’t think that her first foray into this arena is award worthy. Unlike many in contemporary society, I don’t believe that everyone deserves an award for doing their job or what they’ve elected to do. I believe that you have to go above and beyond and show qualities clocking into four digit percentiles to be worthy of an award. “Participation awards” are one of the concepts that is going to be the death of this country. I refuse to applaud mediocrity and I don’t expect someone to applaud me when I am just doing what I’m suppose to do. Call me old-fashioned.

The truth of the matter is, I was excessively snarky in my Twitter stream and this is something that I recognize as a fault of mine. It’s fun to bash on that which we have no control of and people titter occasionally when we say something snarky but this is an item on my personal improvement list: I need to be less snarky. I stand by my criticisms of the show but as has been pointed out to me, I probably should have just enjoyed it for what it was.

So let me state for the record, I enjoyed “The Sound of Music Live!” for it’s spirit. I might not have thoroughly enjoyed the execution of the project, but I certainly enjoyed the heart behind it.

Perhaps I should have just focused on that.