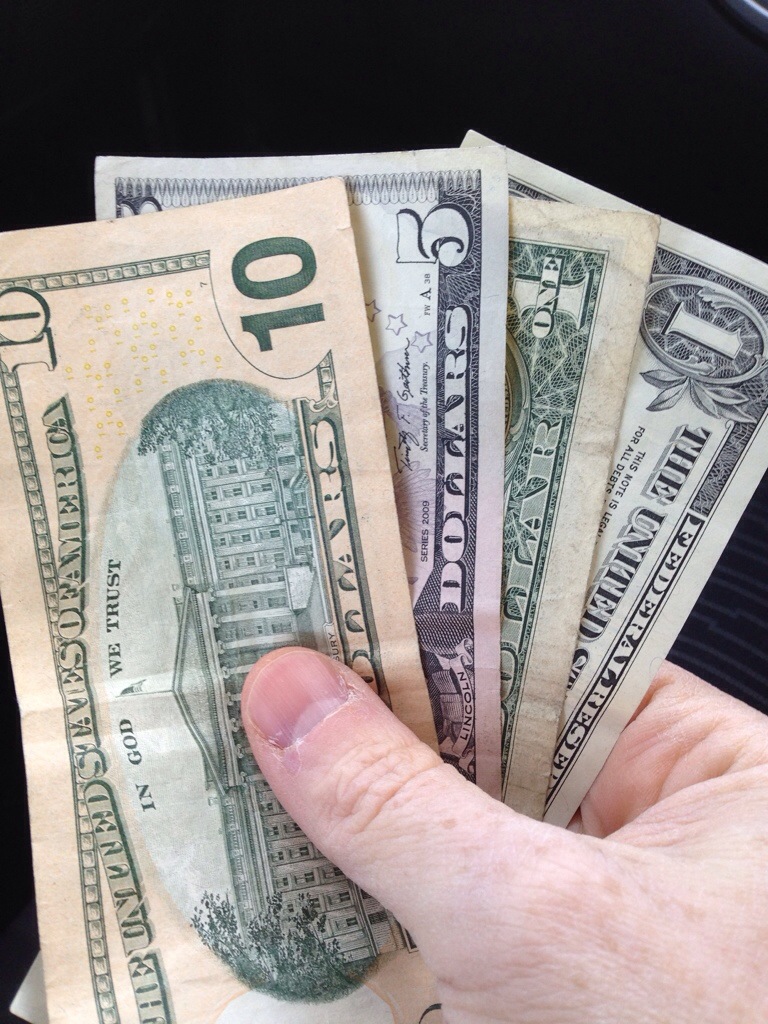 I am at the office today. Per my routine whilst at the office, I just picked up a large, unsweetened iced tea at the local Dunkin’ Donuts. Long gone are the days where the staff was friendly at they smiled and said “thank you” and the like. Now you are greeted with a blank stare and airs of hysteria surrounding some sort of drama with the hot chocolate machine. There is no greeting, there is no parting message, just some punching of virtual buttons on a screen, money tendered and less money thrown back at you.

Now because I grew up in a retail environment, I’m probably more sensitive to this than most, but it makes me nuts when a cashier hands me back a wad of cash with the coin laying on top and a receipt on top of the whole mess. I know we live in a world where faster is better, but come on, please at least pretend that you care that I am contributing to your low cost paycheck.

The total came to $2.86. At any other Dunkin’ Donuts it would have been $1.99 plus tax, but this is the Johnstown Dunkin’ Donuts and they have tea bags laced with gold or something, so we pay extra for the surly service. I handed the cashier a $20 bill.

1. She put the $20 in the till before giving me my change. WRONG. You lay the $20 on top of the till so that if there is a disagreement to the amount of change given to the customer, there’s visual evidence.

2. She put the $20 in the till tails up, which was contrary to the $20 directly underneath it. WRONG. All your bills should go in one direction. I always learned that bills went heads up and to the right, but others might have a different approach. It doesn’t really matter (actually it does to me) outside of the fact that all the bills should be going in the same direction. It just shows care and organization. Disorganized money means you really don’t care: you don’t care about your job, you don’t care about whether your drawer balances or not and quite frankly, I’d bet dollars to day old DD donuts that you don’t care if you’re wearing clean underwear or not.

3. She yanked out the change and handed me a wad of bills, coin and paper. The bills were in disarray (pictured above in the same state as received, save for the fact that I flattened them out) with the heads and tails going every which way. I threw a penny in the tip jar in order to make some sort of point (why does a cashier need a tip jar?) and I pocketed the rest of the mess. The penny tip went over her head because she apparently doesn’t know how to count. She didn’t count the change back to me because, again, it’s obvious that she doesn’t care if her drawer is balanced at the end of the day nor does she really care if I have the correct amount of change or not. While in the grand scheme of things this is all highly unimportant, this must be echoed in the fact that at that very moment, my patronage is not important. I’m not important. My unsweetened iced tea is not important and apparently the continued success of this Dunkin’ Donuts franchise is unimportant.

4. I received a glare when I mistakenly went to the “pick up area” to pick up my unsweetened iced tea because obviously that is all a ruse, everyone that’s anyone knows you’re suppose to fling your body over the discarded dishwasher delivery box that’s in the middle of the line (collecting Toys for Tots) and reach over the scalding hot coffee machines to get your beverage. Thus, the glare.

I was really tempted to dump my drink into the coffee machines but I declined the opportunity.

Here’s the thing. I know that the American Way, especially in the “progressive” Northeast, means to be as hostile as possible to others, especially in a retail environment. I get that. I weep about it, but I understand this. It’s the Millenial way and as a Generation-I-really-don’t-know-what-I-am, it’s not my job to question the ways of the wise. But would it really harm someone’s street cred to at least feign being interested in a task at hand?

Earl and I frequent a diner on a semi-regular basis. There are two hostess/cashiers at this diner and they work opposite shifts. The younger of the two flings menus around and tells us where to sit. When we pay for our meal, she tells us how much change we are receiving. I guess I should be happy that she counts at all. The money is in disarray.

The older of the two women asks us if the booth in question will work for us that night. When we pay, she counts our change back to us from total to tendered. I don’t have to do math, she doesn’t have to do math. There’s no math. We start at $18.84 and she’s going to count the change up to $19 and “one makes $20”. “Thank you and have a nice night.”

Is that really so difficult?

The blame of all this lies in my generation, the “Generation-I-really-don’t-know-what-I-am” set, because we have done a miserable job training these Millenials for menial tasks such as slinging hamburgers at McWhopper. I suspect that because there’s no trophy at the end of the day, they couldn’t care less. There’s nothing shiny, it’s just a job. They’re not getting promoted, they’re not earning stars, there’s no applause. Just a paycheck and that’s obviously not big enough, hence the need for a tip jar. 1

Here’s a tip: learn some manners, at least fake interest in what you’re doing and for the love of all that’s holy, let George and Abe and Ben all face the same direction in the cash drawer.

1 I hate those tip jars, however, I will tip at Starbucks IF the folks behind the counter are pleasant about their work. Otherwise, you ain’t getting a tip from me.