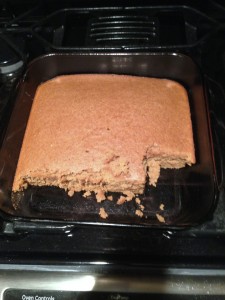 In the mood for a dessert I went through the cupboards to see if Old Mother Hubbard was there holding a cake mix. Though the frosting had expired long before healthcare.gov went south the cake mix was still valid for six days. What could go wrong? Right?

So it’s a carrot cake mix and one of the required ingredients is a cup of carrots. Who keeps carrots in their house on a Thursday night? We certainly don’t and it’s all because we can see things in the dark.

Anyways, no carrots but we did have tomato soup in the house and I remember a woman named Peggy that I used to work with saying something about tomato soup and carrots and I thought “whoo-hoo!” I bet a can of condensed tomato soup is the same as a cup of carrots. So I dumped in the mix and then added the two eggs and the can of soup. But the recipe called for water and condensed soup called for water, so I decided to be crazy and I added a 1/2 cup of water instead of the full cup. This made the batter into tomato soup. Ugh. So I added unbleached wheat flour because we didn’t have anything else that resembled flour. Then I figured the flour would be kind of bland so I threw in some nutmeg. Because I think in metric (we were going to switch when I was in elementary school!), I’m pretty sure that I didn’t add a hectare of nutmeg. It was a healthy amount but I didn’t sneeze because I was sure that pepper was not in the question.

The cake batter started looking like cake batter again so I mixed it up good, put it in the greased cake pan and baked this slight foray into experimental cuisine. 50 minutes later, voila! It was time for the big test.