At lunch time I found myself watching the very last episode of “The Secrets of Isis”.  Part of a shorter second season, this episode was actually a pilot for a new series that would have been called “The Super-Sleuths”. They pulled out all the stops with this episode as they used plenty of blue screen effects, and both Captain Marvel and Isis were seen to be flying side by side.

I think they made a pretty cool couple, though in a short story I wrote years and years ago, Andrea Thomas (the incognito version of Isis) didn’t marry Captain Marvel, since he was really Billy Batson who was a teenager that hung out with an old man named Mentor, but rather she married teacher friend Rick Mason.

Though Jason Bostwick tends to be the favored actor that portrayed Captain Marvel in this series, as a young lad I always found myself much more attracted to John Davey, pictured here with JoAnna Cameron in their superhero roles. Mr. Davey had a friendly clean-shaven lumberjack come math teacher vibe about him.

I know Ms. Cameron lives in Hawaii and does the comic circuit from time to time, but I have no idea as to what happened John Davey. 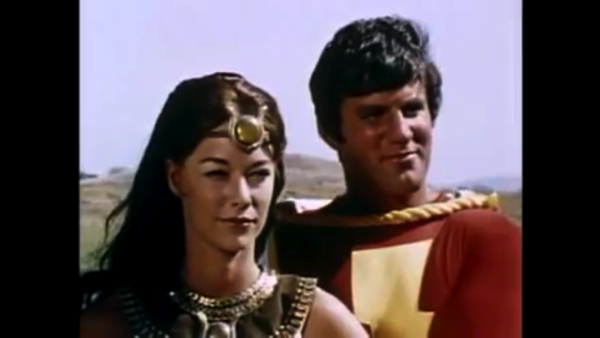 Interesting footnote, the vast majority of both the “Shazam!” and “The Secrets of Isis” series were filmed outdoors because Filmation simply didn’t have the budget for lighting. The astute observer will also notice that Andrea Thomas almost always wears the same blazer regardless of where she is or what she’s doing, because the transformation sequence from Andrea to Isis is always the same sequence.