So I am on my way to a weekend adventure with our friends Jeff and Mark in Durham, N.C. Â On my way to the airport, I came to the realization that I hadn’t had any lunch and that I would probably not get much to eat in between here and there, as eating on a plane is usually limited to a bag of peanuts and half a can of diet pop. On the bright side, since I’m taking two flights to get from here to there, I will manage to squeeze in a full can of pop by adding the two half-cans of pop from each flight together.

And they say math is difficult.

In many areas of the country there are interesting restaurants and the like near the airport of said destination. In Syracuse it’s a different story. Syracuse Airport is actually near the Village of North Syracuse and while there’s a lot of chain restaurants in the area, nothing that I would really call “nice” comes to mind immediately. I decided to indulge my curiosity and gives these new “Satisfries” a try at the Burger King closest to the airport. Â I remember this location from my childhood when it was actually a Carrols1, but it’s a Burger King now and it’s been there for a long time.

Upon entering the restaurant I noticed a warning sign on the door that proclaimed no videography or still photography was allowed in the restaurant. I think this sort of thing is kind of bogus and I was a rebel, because I noticed that a group of people had just left a HUGE mess in the dining area.Â Â 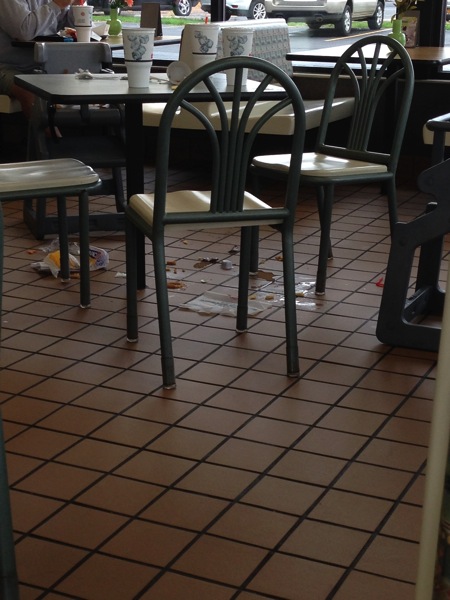 Now, I think that I’m a pretty responsible citizen of the United States (rebellious photography notwithstanding) and for the life of me I can not figure out how anyone could leave a public place in such a state and not give any care about it. This is mind boggling to me and such activity only leaves me to be seriously concerned about our society as a whole.

So I ordered a grilled chicken sandwich (hold the mayo!) and the new Satisfries. They smelled and looked like fries, albeit krinkle-kut fries instead of the usual shoestring fries that Burger King serves (I think). Â I’m thinking the krinkle-kut approach is so they can tell the difference in the fryer, but that’s just me. 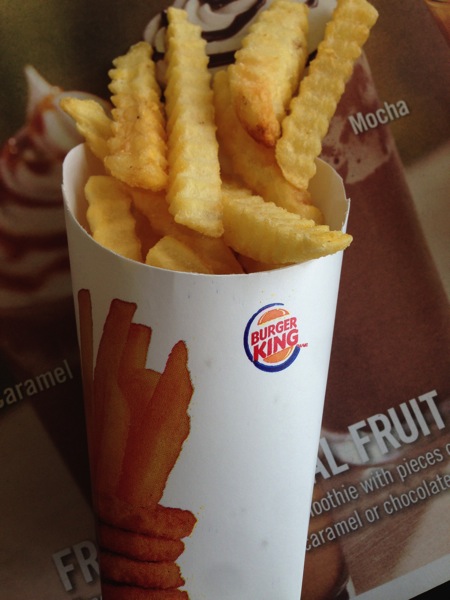 The first thing I noticed about the fries is that if you like salt, you’re going to love these because they are really salty. Like, the way salty fries used to be before people cared about sodium and all that. I liked that, though my blood pressure probably doubled in the process. As far as fat content and coatings and all that stuff, I couldn’t really discern a difference from regular fries and I suppose that was the intent. Other than the krinkleness of the fries, they seemed like good ol’ unhealthy fast food fries.

After watching a very large woman make her way to the self-serve drink station not once but TWICE with a 32-oz cup, and watching her fill said cup with regular coke2, I finished my meal, made my way around the mess in the dining room and headed for the airport.

I was barely in the airport ten minutes later when I was making a bee-line (not the Florida tollroad) to anything that resembled a toilet. I didn’t care if it was unisex, no sex, all sex or a potted plant, but I needed to use the rest room. Immediately. I found this curious as I had done my business at home before leaving for this little journey, so I’m thinking the Satisfries did something to my digest system. Or it could have been the premium chicken (hold the mayo). Or it could have been the fact that I ate at Burger King at all, since I tend to avoid that sort of thing nowadays.Â

I felt much better 10 minutes later.

Did I find the Satisfries satisfying? At the time of consumption, yes I did. However, based on my one experience with these, if you’re going to eat these things, I would suggest that you plan your rest stops accordingly.

Best of luck and bon appetit.

1 The Carrols brand is still alive and well in Helsinki and I have actually considered flying there to see if the fast food there is as good as I remember it being when I was a child.

2 I really struggle with the revenue model implemented by the Affordable Care Act (Obamacare) when I see people blatantly making poor health choices and then the entire population ends up paying for these poor health choices. While I believe that everyone is entitled to health care, I believe that people need to be accountable for their own actions. I don’t have a solution to the problem, so I don’t wretch about it too loudly, but I don’t think that any of the legislated or proposed ideas fulfill the need adequately. I think a societal shift is in order and I don’t see that happening anytime soon.