Guess who’s excited about the Apple event that is starting in less than 30 minutes as of the writing of this blog entry?

The media has been chattering about the imminent release of the iPhone 5S and it’s new, less expensive sibling the iPhone 5C for weeks. While I am not due for an upgrade of my phone (I’m on the non-“S” cycle and there’s absolutely nothing wrong with my iPhone 5), I am excited to see what Apple brings to the party today. Will there be a surprise? Will there be some new, nifty feature that’ll show that Apple can still innovate?

I’m also excited about the release of iOS 7 and OS X Mavericks. As an Apple developer I’ve had iOS 7 on my iPhone for a few weeks and as of the latest beta I have had very few issues with it. And while at first I did not like the new “flat UI”, I’ve actually grown to love it. It took me a little while, but it feels “airy” (for lack of a better word) and modern. If you visit directly, you’ll notice that I’ve switched to a flat UI theme for my blog.

I’m really hoping Apple gives us “one more thing” and talks about something completely unexpected. Let’s see what happens today. 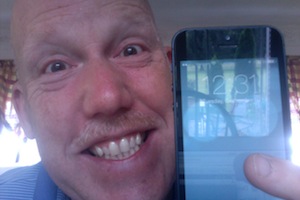