I always find it humorous that when you drive through Syracuse on the New York State Thruway, you see a snowplow parked in a maintenance yard that says: “Welcome to Central New York — 115-inches Annual Snowfall”, or something like that.

I keep hearing mentions of Global Warming but I remember summer days like this way back in the 80s, so while I think this is a warm spell, I don’t think it’s overly unusual for this time of year. That doesn’t mean that I don’t think the climate is changing, because I really think it is, but I don’t think this part of the world is experiencing anything wildly abnormal at the moment. If it’s like this in September then I’ll start to wonder.

I get concerned when people leave their animals in the car in this weather. I haven’t seen anyone doing that today, but a few weeks ago I saw a dog in a car with the windows open only about 1/4 of the way down and I was concerned for the dog. He seemed like he was OK but I didn’t know how long he would be there. If I saw an animal in serious distress I don’t know if I would be able refrain from breaking the window and helping them out. The one bad thing about a pet has to be the reliance on the human. Sometimes the human isn’t the brightest bulb in the chandelier.

A horse and buggy just walked by the parked Jeep. 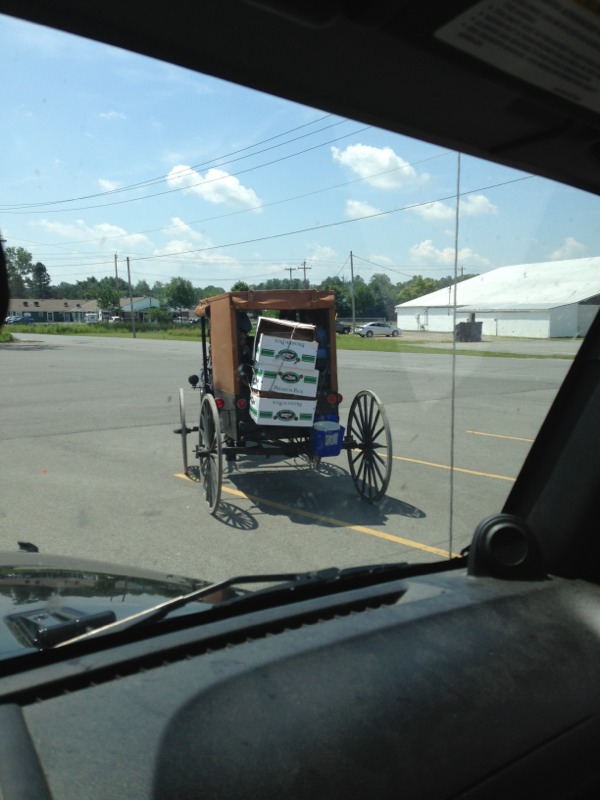 The buggy was loaded up with boxes of tomatoes from the local market. The Amish man driving the buggy parallel parked the horse and buggy so he could go into the nearby Burger King. He didn’t get anything for the horse but the horse didn’t seem to mind.

I bet it’s hard to pull a buggy in this heat.