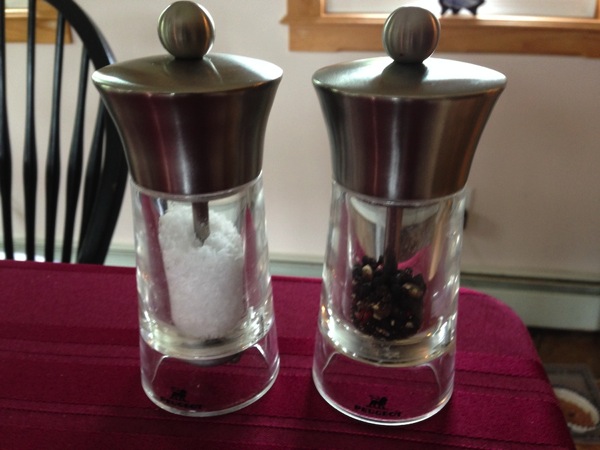 So it had been a little while since I had last cleaned out the salt and pepper mills that sit on our kitchen table. It’d been a few years. Ok, maybe a little while longer, like a decade. I had dutifully kept the mills filled and available for all that wanted to spice up their meal a bit (you can’t taste it unless it’s salt and pepper!) but they were looking a little grungy from all the paw marks so I thought I’d be a good husbear and clean them out.

Once emptied of their contents it was easy to clean each of these handy little devices and bring them back to looking like new. However, when I went to fill and reassemble them, I suddenly realized that I hadn’t kept track of which was the salt mill and which was the pepper mill.

When we purchased this set we had to take a little class at Williams-Sonoma to maintain the sanctity of the salt and pepper mill culture. There were several questions on the pop quiz: what kind of grind did we want, how did it feel in our hand (I felt dirty that day) and so I should have surmised that cleaning and reassembling these devices would not be a trivial thing.

So I went online to find the difference between the mechanisms. Apparently one is a male grinder and one is a female grinder.

I’m sure the NSA isn’t surprised with some of the results I received from searching on male grinders and female grinders.

After swapping the salt and pepper back and forth numerous times, letting out a few sighs of frustration and coming close to licking the counter (the test area) to see if anything was coming out of these male and female devices, I finally figured out which was which and got everything working properly again.

So at the next cocktail party, when asked if the pepper grinder is a male or female, I can simply answer, “I have no clue”, because I have completely forgotten which was which. All I know is that they are working properly now.

Let’s see what happens in a decade when I clean them again.