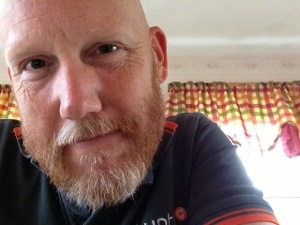 So I’m sitting here thinking about this blog entry when I’m distracted by a rumbling sound coming from the distance. It’s not an approaching thunderstorm; the rumbling is going on for too long at a time. The screen door to the patio rattles just a little bit which makes me briefly wonder if we are having some sort of little earthquake. I don’t think that’s the case either. I then deduce that they must be testing repaired jet engines again at the near by former Air Force Base. They can get quite loud and the wind must be blowing from the right direction or something.

Today is Tuesday and I am feeling good. I just told a friend online that I am feeling rather feisty today. Right before lunch I sent an email that contained the sentence, “since I have much cents today, here’s two more.” Just as I do on my blog from time to time, I tend to write in a colorful manner when provoked to do so. Now that I think about it I probably speak in the same way when giving presentations and the like. It’s just part of my wiring. It’s a nifty option if you can get it installed.

Our cat Tom must have glanced at the calendar and realized that it’s almost summer time because he has now begun his fair-weather routine of exiting and entering the kitchen through the screen door to the patio a minimum of three dozen times during my lunch hour. He isn’t as quick as he used to be at it, he only saunters up to his food dish instead of tearing through the kitchen to grab a quick bite, but for an 18 year old cat he’s holding his own. As long as he’s still around he can do anything he wants because as far as cats in my lifetime go, he’s been around the longest. He’s earned the right to act like a senior citizen. However, he has not earned the right to dig a hole through the new screen in our new patio door. I think he’s still planning a way to make a hole in that screen though, even though he strives to look innocent.

I am using my iPad as my full-time mobile device these days and am trying to use my older MacBook Pro for DJing. I made a tactical error last week by upgrading the laptop to the beta version of OS X Mavericks. It’s not quite as ready for full-time as I originally thought. It’s working fine, but there are glitches here and there than can be frustrating. I’m definitely not moving to iOS 7 on my iPad (when it’s available as a beta) until the final version is out. Maybe I’m not as adventurous as I used to be or maybe I’ve found some more common sense.

It’s good to have some sense to share once in a while.