I have been striving to include a photo or graphic of some sort with every blog entry lately, in case you haven’t noticed. I often come up with the title of my blog entry before I actually write it, and since I typed the word “Freedom”, I had to figure out what I wanted to include as a photo to represent this blog entry.

When I looked up from my seat in the Jeep, I saw that there was a United States Flag blowing beautifully in the wind right in front of me. So today, we enjoy a photo of the U.S. flag. 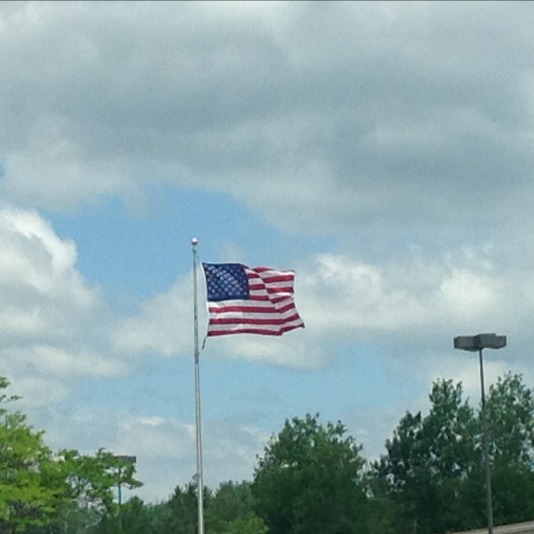 I have been thinking about freedom more than usual lately. It’s a word that gets bandied about in the media, during debates, in every day conversation; it’s the descriptor of what makes the United States “great”. We have the most freedom of anyone that calls themselves a citizen on the planet, so the story goes, and we take this freedom very seriously. Thousands upon thousands died as sought our freedom and millions have died defending our freedom. Millions of citizens of the United States have enjoyed the freedoms that we probably take for granted within our borders.

Why is it that more and more Americans don’t mind giving away some of that freedom lately?

By now you have probably heard the name Edward Snowden. He is the “whistleblower” that revealed details of the NSA’s monitoring of ALL phone call metadata in the United States. While the NSA isn’t listening to the content of your phone call, they do have a record of the fact that you called the pizza joint down the street and ordered your usual pepperoni, anchovy and pineapple pizza. And by the way, ew, what a weird combination of toppings!

The NSA is doing this in the name of counterterrorism efforts. They are looking for patterns in communication efforts so they can see who is connected to whom and where they are making that connection. This helps the NSA identify “trends”.

Many Americans scream, “I don’t really care that they’re doing this, because after all, I’m not doing anything wrong so I don’t have anything to worry about.” As I mentioned last week, that’s great until you inadvertently butt dial Iran and you find yourself with a drone up your ass because you’ve been deemed a threat.

The thing is, I don’t think the government should give two hoots about what I’m doing within the privacy of my own life unless they have a reason to believe that I’m doing something wrong. I’m sorry but as an American, I’m innocent until proven guilty, I am not automatically “under suspicion because I use the telephone or the internet.” I am not willing to give up my freedom just because there’s a chance that someone thinks that someone else somewhere that might be remotely connected to me (we go to the same car wash, for example) and therefore they feel that I should have my personal activities monitored. Too many brave men and women have fought to the death to protect the freedom that I enjoy and because of that, I’m not that willing to give it up. I find Edward Snowden to be a brave man who is fighting for our freedom just like the millions of soldiers have done so over the past 220+ years. I commend him for what he did, and though I do believe that the NSA should be able to conduct their intelligence gathering in secret ways in order to protect the freedom that we enjoy, I do not believe that we should be so eager to give up our freedom so that the government can broadly generalize, sweep and mine data.

There has to be a better way to gather intelligence. It is expensive, it is intrusive and it is unscrupulous to gather and store ALL the metadata of every single phone call made in the U.S. And until the NSA can do better at this by respecting that which was given to them by their Creator, they need to stop.

Freedom. It’s meant to be shared, not given away.