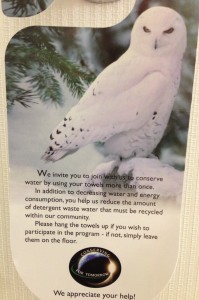 I’m a big fan of this owl. Often seen in hotel rooms, he is a reminder that we should be as ecologically responsible as possible by reusing our hotel towels and the like whenever we can. Cutting down on detergents and water use and such helps the planet just a little bit more and every bit helps. Since I’m such a firm believer in these things (and because I have always liked this particular photograph of an owl on the little reminder placard), I dutifully hung up my towel and washcloth after my shower this morning.

This afternoon all linens in the bathroom were gone. Dirty towels, clean towels still on the shelf, everyone of them had disappeared.

Unable to take a shower to freshen up for the evening activities, I went down to the front desk and asked the person working the desk for a set of towels and washcloths for the room. He wrote down the room number and made urgent sounding calls on his walkie-talkie. Earl and I then went out for a bit.

Returning to the room, still no towels or washcloths. I called down again and was told that I had already asked for a wash cloth and towel. I responded that I was fully aware of this but nothing had arrived in the room. Come to find out, housekeeping had stopped by and had knocked on the door but no one answered. Apparently, housekeeping doesn’t come in after the room has been cleaned for the day.

They sent someone up right away. We received two bath towels and nothing more. I figured that was good enough. We’ve made due with much less at home when we’re lazy with the laundry.

I don’t know if I’ve helped that majestic looking owl on the placard today but I hope that he knows I had the best of intentions in mind. I suppose by discussing this little thing, some gentle reader might notice the same owl or one of his friends in their hotel room during their travels and this will, in turn, prompt them to have a better experience with being ecologically responsible with their linens.