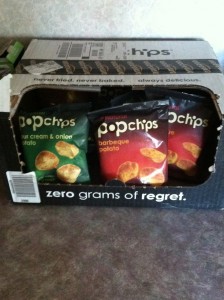 So I was looking for something that was like a chip but didn’t come loaded with the calories and fat content of a chip or crisp. Since we won’t talk about that experiment with Olestra again, I decided to do some research in the local market and picked myself up a bag of PopChips. I decided to go with the Barbecue flavor for my initial outing.

PopChips are like potato chips (or crisps) except that they’re cooked via hot air instead of being baked or fried. There’s hardly any fat in them and they’re only 100 calories per bag.

They are perfection with my lunch!

Since I always do things to extremes, I purchased a case of PopChips in a variety of flavors and had them delivered via Amazon. Earl doesn’t care for them that much (“don’t be finicky my husband, it’s PopChips!”) which is fine by me because that means they’ll be ready and waiting when I want them.

I mention them today because I thought that the case I bought had three flavors in it: Original, Barbecue and Sour Cream ‘n Onion. I was wrong. There are SIX flavors in this case and the back row includes: Cheddar Potato, Salt ‘n Pepper and Sea Salt and Vinegar.

I think the Amazon purchase has followed its natural progression to an Amazon subscription where I automatically get a case delivered once a month. How I love that subscription service. We just need to add a warehouse onto the back of the house to store all our goodies.

If you’re looking for a moderately healthy snack to satisfy that potato chip (or crisp) craving, I highly recommend PopChips.