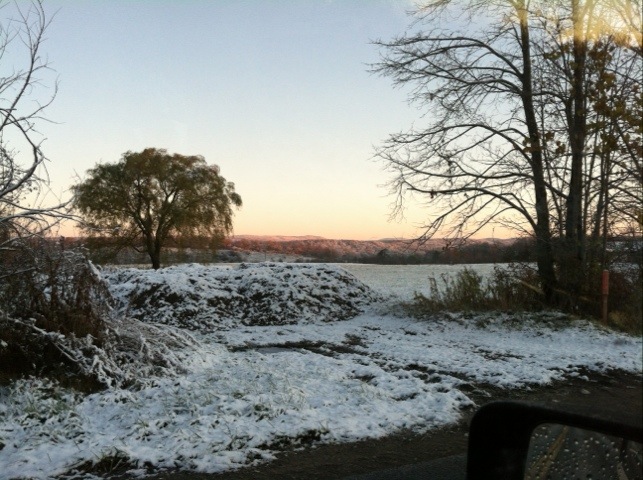 This is the second time I have written this blog entry. I hope it is as well crafted as the original version. You know I’m going to tell you what happened: blogpress on my iPad crashed again and took my blog entry with it. Someday I’m going to conquer the world with a decent blogging app for the iPad.

I could have easily doubled the length of my morning commute. You see, last night we got our first snowfall of the season. I was like a little kid driving along this morning when I first saw the snow. Our house seems to be at some arbitrary point of demarkation because all the houses up the road from us had snow on their lawn but the houses in the other direction did not. I did notice that the A-frame across the street was torn down yesterday; all that remains is the actual floor of the first story and the foundation/basement supporting it. Earl and I are going to go snooping around (like Mrs. Kravitz, complete with an empty cup that needs sugar) so that we can read the fine print of the construction permit posted on a stick in the front lawn. We’ve heard that you need a construction permit to do demolition work and we’re curious as to what’s going on with the house since the interior was burned last year.

My commute afforded me the opportunity to see many snow covered hilltops here in the foothills of the Adirondacks. The sky was brilliantly clear and full of sunshine, and it all made for a beautiful backdrop for the fresh snow. I could have easily taken a thousand photos and that’s what my heart was telling me to do, but the clock was telling me that I would have been mighty late for work. Perhaps I follow my head too much and I need to follow my heart more.

I did manage to take one photograph with my iPhone (above). I snapped this shot before a surly school bus driver apparently tried to run me down. The mood would have been ruined had it not been for the horse drawn buggy that followed behind. The kind folks in the buggy waved hello. I was hoping they would have some pies but they don’t sell them at this time of year.

What a wonderful way to usher in the weekend.

The snow was gone by lunch, but rumor has it it’ll be back this weekend. Some say no snow, some say six inches, I guess it depends on who’s trying to generate the most ad revenue.

Either way, it’ll all be enjoyed.