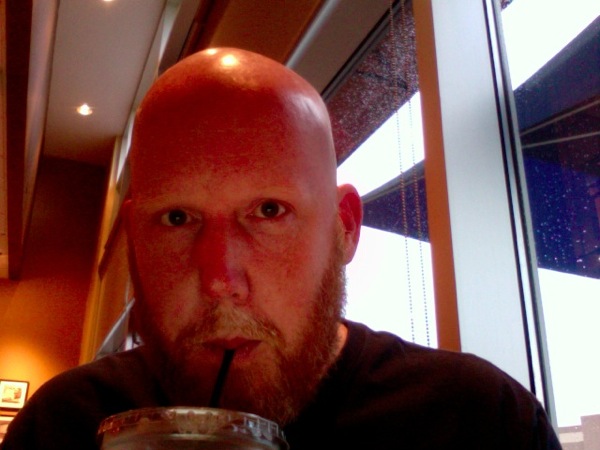 I am sitting at the local Panera, where I believe that the natives have finally learned that it is not appropriate to ask for fries with their meal. They still haven’t broken the habit of standing as far away as possible from the counter before being called upon to place their order, but I can share a big sigh of relief that no one mentioned wanting fries with their happy meal for their screaming kid that is taking his pants off whilst standing on a chocolate chip cookie.

Even though it’s Friday in many parts of the world, it is Tuesday night in my world and tomorrow is a workday for me. It’s my quarterly turn of on call. Longtime gentle readers of my blog may remember the old job where I was on call every few weeks and on the brink of insanity under all circumstances. They newish gig I have doesn’t foster that type of response since on call isn’t nearly as involved as it was with the old job. I’m feeling good.

Other parts of the family are out exploring the world tonight. I’m in the mood to chase a thunderstorm. It seems like Mother Nature is giving me the opportunity to do so. I took some shots of an impressive line of clouds on the ride home.  It looked something like this. 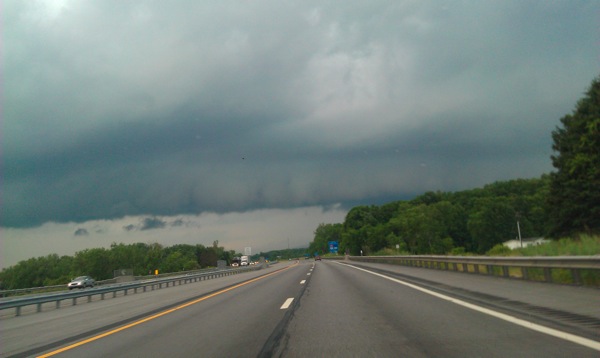 The bark was much worse than the bite, because there was hardly any lightning and thunder, nary a tornado but plenty of rain. We get rain with everything now. It’s like the sprig of parsley on a mediocre dish. Rain always comes with the landscapes in these parts. One of my co-workers from the Dallas-Fort Worth office commented that he didn’t know it was so much like the northwest in these parts. I said that it usually isn’t unless this is the new norm.

I have received quite a few emails and tweets about my marriage post (the post previous to this one). Since writing that post the New York big wigs have announced that the NYS Senate will vote on the same sex marriage bill (they call it #SSM) tonight. Should the vote be the right one, I will be proposing to Earl before morning. We have dreamed about having a big shin dig. I think it’s high time that we finally did. I hope all of our family comes from all parts of the world to share the celebration with us.

I posted such random things when I am at Panera. I just noticed that the Turkey Focaccia sandwich looks less appetizing than your standard grilled ham and cheese made with welfare (yellow) cheese. At least cheese in a can would have spruced it up a little bit. Perhaps they need a sprig of parsley.

Earlier in the week I shared a few comments about some of the podcasts (netcasts) from the TWiT network. I have adjusted some of listening habits and am now focusing on TWiG, “This Week In Google”.  The regular participants of that particular podcast rock. I am a fan of geek girl Gina Trapani. She is an out lesbian, writes a book now and then, writes plenty of articles about all things tech but most importantly, she loves Chipotle and isn’t afraid to dance to a little bit of “Glee” like we all do. Along with CUNY professor Jeff Jarvis,  they join Leo LaPorte to talk about all things Google and the cloud. Google has made a few missteps along the way and I’m not a huge fan of ad-based products, but I have to admit that they write magnificent code, and ever since switching to my Android-based HTC Thunderbolt, I’ve learned a few good tips here and there.  I hope to shake Gina and Jeff’s hand someday. I think they make wonderful contributions to the community.

By the way, I’m becoming a bigger fan of the Google Chrome web browser. I actually run Chromium, the open source version that doesn’t have the Google branding in it, but it still allows me to sync with my Google account. It’s all good. I figure Google doesn’t have enough time to sit down and read my stuff. There are other more interesting people in the world.

And last but not least, I caved in and trimmed my mustache back but left the beard untouched. I have a habit of chewing on my mustache when it’s long. The trimmed ‘stache with big beard makes me look trendy. Especially when I have my hat to the back.