I have been determined to get back into a regular cycling routine again this summer. I have slacked off for the last couple of summers, mainly because of work obligations but with some additional contributions of laziness. However, I felt that this was the year that I needed to get back on my bicycle and make some strides in the fitness department doing the one sport that I love the most.

I set some pretty lofty goals for myself this year that I haven’t really discussed all that much. My first goal was to ride a 100 mile route (actually 105 miles) from our lovely little home in the Mohawk Valley to Binghamton. This jaunt would take me from north to south, downward on the map, of course, which in my head means that it’s downhill. Now I don’t really believe that but I like to think that’s the case once in a while.

I can tell you that it is certainly not all downhill.

The 105 mile ride was a lofty goal, and the wet weather we have had this spring didn’t give me many chances to train for this ride, but I figured that I would make a go of it. So with only a few of double digit rides under my belt this season, I set out at 7:30 a.m. on Saturday morning. The goal was Binghamton with an intermediate goal of Sidney (65 miles). I was geared up and ready to go 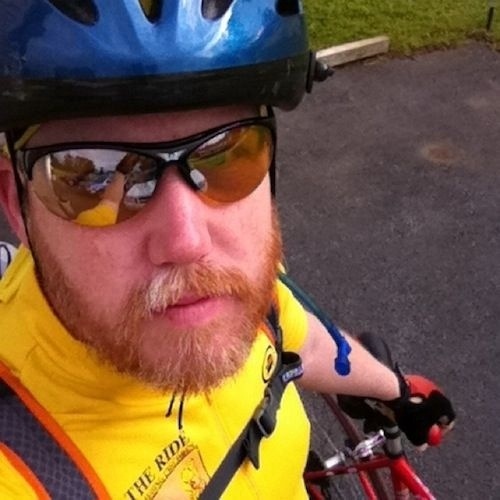 My plan included tracking my ride using the iMapMyRide app on my iPhone, as I have done earlier this season, because it keeps track of the terrain, my average speed, the actual distance and how many calories I am actually burning during my ride. About two hours into the trek I stopped to take a photo of a road sign that features the new Clearview lettering that’s popping up all over the country (this sign is the first one in this area using it, to the best of my knowledge). 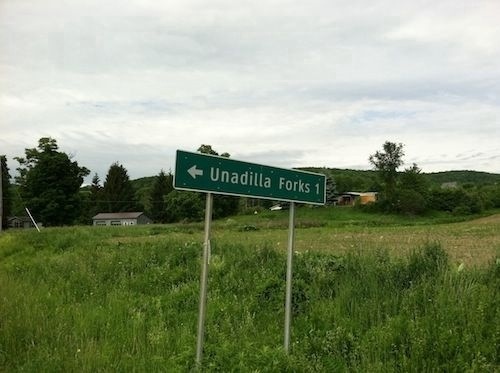 It was then that I realized that while the iMapMyRide app is quite good on the iPhone, it kills the battery dramatically. Taking this photo, 25 miles into the ride, completely killed the battery on my phone, the phone that was fully charged when I left just two hours before.

I turned the phone off so that I would have enough juice in the case of emergency and continued my way down NY Route 8. I said hello to cows, greeted barn cats that stalked me from the ditch (though one was quite friendly and wanted to greet me in a warm, cat-like way) and enjoyed the cloudy but not overly cool weather.

I made a stop in the small village of New Berlin to pick up an extra bottle of Gatorade, as I had gotten through the one I had packed as well as a bunch of the water I had brought along. When I snapped out of my pedals I noticed that my left shoe was loose. I took a look and discovered that I had lost one of the bolts off the clamp and the other two had loosened up. This would explain why my right leg was hurting, it was working hard than my left leg because there was an extra bit of wobble in the left shoe. I tightened up the remaining bolts, rested for a bit and continued on.

Earl and Scott stopped by in the truck shortly afterwards and checked on my progress. This is a tradition with my bike rides. I start out and then Earl leaves three or so hours later, hoping to find me somewhere along the route. He then drives 10 or so miles ahead and we leap frog to the final destination.

All went well with the ride until the stretch between Mount Upton and Sidney. There I ran into some raindrop, which isn’t bad in itself, but that’s when my body started talking to me.

“Daddy”, my body said, “I know you think you’re 25 but you’re 42. 65 miles is very impressive for the first ride of the season and I think we should call it a day when we get to Sidney.”

“But Binghamton awaits!”, was my reply.

“You’ve made really good progress but I really think that we should call it a day so that we can ride again next weekend without having to pass through intensive care on the way.”

The body won. I stopped at Sidney at 65 miles on the nose. It was an excellent ride and I was most pleased with the progress. I plan on doing a 100 mile trek before my birthday in July. I’ll just have to continue to train so that all my parts start working together properly.

My ride was rewarded with a stop at the Neptune Diner in Oneonta and then Earl and Scott drove home while I slept in the back seat.

My body screamed in pain Saturday night but it wasn’t anything that a couple of Advil couldn’t cure. Now I’m ready for the next trek. I’m going to scratch Binghamton off the list and try a different location. Something west to east, perhaps, so that it seems more flat.