I’m going to preface this blog entry with two points. 1. I am writing about adult themes in this entry so it probably shouldn’t be viewed by someone that would not be considered an adult and 2. I am completely aware of where I am writing in this entry, the content and it’s visibility.

As you may have heard, American Idol runner-up Adam Lambert performed the final number at the American Music Awards. This was Adam’s chance to debut the first single from his new album. I believe the title of the song is “For Your Entertainment”.

Here is a screencap from the performance, courtesy of National Examiner. 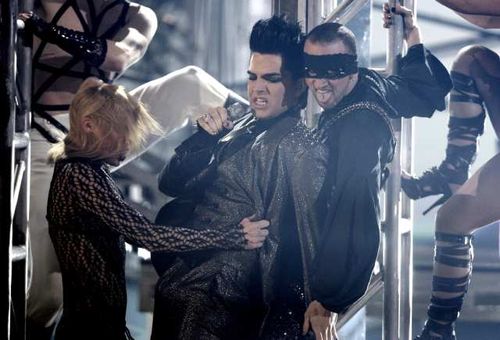 Adam’s performance was, to put it mildly, sexually suggestive. No disrespect to inflated breasts but this performance sexually blew Janet Jackson’ wardrobe malfunction out of the water for a couple of reasons: he french kissed a male guitar player, he had a submissively clothed man simulate oral sex on him and he dragged a scantily clad woman across the stage like a bag of so many potatoes. And that was just a few of the highlights. The performance seemed a little clunky in execution but the vibe was very hot and steamy.

The vocals and the song were both ‘meh’. If it weren’t for the controversy around this performance no one would still be talking about it.

My thoughts on this stunt, and I do firmly believe that despite reports to the contrary this smacks squarely of a publicity stunt, are all over the page.

First of all, I believe that many of the issues we find in American society are because people are downright terrified of their sexuality and because of this, we have put so many taboos on the subject that everyone is afraid to do what truly turns them on. Whether this was a publicity stunt or not, Adam was expressing himself artistically and freely. I totally get that and I identify with that. There is something quite freeing about walking down a foreign city street on a hot summer night in a pair of assless chaps, a jock strap, a leather vest and a pair of military boots. However, time and place are the key here. And this is where I have a problem with Adam’s performance.

The American Music Awards are primarily a family program. This is where the younger generation gets to see awards given to their favorite artists. This is where they see live performances of what they are listening to through their headphones. Whether they are a good influence or not, today’s artists are definitely influences on the younger folks. What they see and hear get integrated into their life experience either consciously or subconsciously. While I don’t have an issue with Adam’s performance per se, I don’t think that a nationally televised award show airing before 11 p.m. (10 p.m. Central!) was the right venue for it. Where Janet Jackson’s boob was a wardrobe malfunction, there was no mistaking what was going on during this performance.

I get the artistic expression. I get the overt sexuality. I don’t have an issue with that. I have an issue with the time and place. One has to wonder if Adam really likes to get his groove on in this manner. I hate the thought of sexuality being used in a non-genuine manner for the sole purpose of publicizing something. Back in the early 90s, I truly believed that Madonna was expressing herself in a genuine way.

One of the unfortunate aspects of this controversy is that some are saying this sets the gay civil rights movement back a notch or two. I don’t believe that to be the case and quite honestly I think the ones that are saying that from our team are the ones that are desperately trying to prove that gay and lesbian couples are no different than their heterosexual married counterparts. And for many people, that is most certainly the case. But just as their are kinky heterosexual folks out there, there are most certainly kinky gay folks as well with varying degrees of ingenuity all the while across all types of people. I know straight married couple that only played in three ways, I know another that would send their kids to the sitters so they could tie each other to the bed and play with whips. If simulating the forcing of a young man onto his crotch gets Adam going then I think that it’s great to find a way for everyone to be fulfilled, but demonstrating this on the stage at the American Music Awards is not the right place to do this.

It’s no secret that there are festivals, fairs and parades all over the world celebrating sexual exploration. I think these are great things and I have even attended my share of these events over the years but like my feelings on Adam’s performance, I have an issue when these things include family-friendly stuff such as circus-like fire shows, face painting and ice cream. While I believe that parents should be open and honest about sexuality with their children as they ask questions and such, I don’t believe that it should be thrusted (no pun intended) into the face of youngsters without an opportunity for their parents or guardians to step in and decide whether the particular activity/scene/etc is right for their kid. Just as I don’t believe that a kid should see me walking through a hotel lobby in the aforementioned assless chaps. There is a time and a place for all of that stuff and I firmly believe that it’s not always the time nor is it always the place.

We are all different. I know that. I knew I was different in kindergarten when I wanted to tell a young classmate that I wanted to marry him by trapping him under a wood slatted rocker/see-saw thing. I understand that most people are wired to be monogamous. I get that some are wired to only insert pole A into slot B and go no further than that in sexual adventure. And I certainly get that some don’t consider a sexual encounter complete unless there is meters of rope, the rattle of chains and a spinning ceiling fan. I get all that. And this diversity should be celebrated. Again, it’s just a matter of timing and placement.

Do I think the gay rights movement was damaged overall. I don’t. Those opposed to equal rights or pushing the hate and fear button are going to latch onto anything they can get their grubby little paws on, and while I think Adam provided them with a week or two of water cooler chatter, I don’t think it’s going to do any long-term damage. People are who they are and they’ll do what they do.

I just wish it would have taken place at more adult-oriented venue.

Update: One of the things that I want to be clear about is that I have no issue with Adam doing a man-on-man kiss during his performance. It was a bit forceful and had a bit of a crazed thing going on but the actual kiss itself wasn’t R rated. Distasteful? A bit but hardly offensive in my eyes. It was the other adult stuff going on that I was commenting on.