I canâ€™t remember if I have admitted this before here on my blog and quite frankly Iâ€™m too lazy to do a search on past entries, but today I found myself daydreaming at my desk at work about a dream I had long, long ago when I was a teenager.

I wanted to be a backup singer for The Human League. 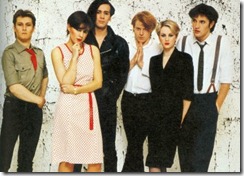 Thatâ€™s right, I once dreamed of being a touring backup singer in The Human League, probably best known for one of the definitive songs from the 1980s, â€œDonâ€™t You Want Meâ€ and a whole slew of other tracks here in the U.S. including â€œ(Keep Feeling) Fascinationâ€ and â€œHumanâ€.

In 1984 I purchased a Yorx Stereo (complete with recordable 8-track) at the local Ames. One of my very first purchases with my own money, my Yorx stereo had a turntable, the aforementioned 8-track, a radio and a cassette deck in it. It even had detachable speakers that could sit on a bookcase.

That Yorx Stereo played every Human League 12-inch single I had in my library (which was each title released to date) and it played each album over and over again as I studied and learned each lyric, each version of every single and the smattering of harmonies found on their records.

Why The Human League, you ask? Well, there are a couple of reasons for this. First of all, if I donâ€™t squeeze my balls hard I sing baritone and I tend to linger more in the bass range. Some find this surprising. I have only sang tenor on a few occasions when singing in part of a group and thatâ€™s where the uncomfortable ball squeezing has had to come into play. The lead singer of The Human League, Phil Oakey, sings comfortably in my range, something that was a rarity in the days of Duran Duran and the likes of Boy George (and especially today!). The only other singer that I could really sing with in the pop world was Pete Burns from Dead or Alive, and while I loved their music, I KNEW I could not get away doing the Pete Burns thing in the small farm town in Central New York I grew up with. At least The Human League was relatively popular and yet they were eccentric enough to stand out in the crowd. Plus, all of their music was electronically derived. THAT was wicked cool to me, being a gadget geek and all. In addition, The Human League had a very â€œ80sâ€ look to them. I knew I couldnâ€™t pull off Philâ€™s lopsided haircut but I could wear the slightly daring style that they did and not get beat up in school. (Funny that I didnâ€™t get my first leather pants for another 20 years or so).

So yes, back in the day I had dreams of singing backup vocals for The Human League in concert. They came to our area back in the late 1990s during a rewind tour with Howard Jones and Culture Club. Working in radio at the time, I tried to pull some strings to get backstage and meet them but they had no interest in meeting anyone. Honestly, my hopes were dashed and I childishly punished them by pulling their catalog from the music rotation at the station for a while. While I knew I wouldnâ€™t be able perform with them, I thought it might be whimsical to share my dreams with them before or after their performance, but no, it was not meant to be.

The Human League still performs live from time to time. Perhaps Iâ€™ll catch them at a future gig and share my little daydream with them. After all, these are The Things That Dreams Are Made Of.

In honour of my remembrance of this little daydream, I share one of their tracks. This is the single that preceded â€œDonâ€™t You Want Meâ€, itâ€™s â€œLove Action (I Believe In Love)â€, also from the â€˜Dareâ€™ album. This track is actually part of a longer instrumental called â€œHard Timesâ€, which wasnâ€™t released in the U.S. until later in 1983 on the Fascination! EP.

Talking or texting on a cell phone is a risky proposition, no matter how you go about doing it. Whilst I try really hard to mind my mobile manners while in a public setting, I have to admit that I am guilty of texting or talking while behind the wheel.

I have decided to stop this practice, effective immediately.

No longer will I hear the frightened murmurs of my passengers. I will now set an example for others by doing the responsible thing.

The decision has been spurred by this article that recently appeared in the New York Times. I find it interesting that politics are playing into whether or not the public should be informed about the dangers about distracted driving.

Here’s the link to the article.

For your reading pleasure, here’s a snippet of the article:

But such an ambitious study never happened. And the researchersâ€™ agency, the National Highway Traffic Safety Administration, decided not to make public hundreds of pages of research and warnings about the use of phones by drivers â€” in part, officials say, because of concerns about angering Congress.