So today is Mother’s Day. This morning I called my sister and wished her well on her first official Mother’s Day. It was good to talk to her.

Last night Earl and I invited my mother over for dinner to celebrate the occasion, since she had plans with my cousin for today and I was wrapped up in an on-call weekend. Earl made a wonderful dinner for the three of us. We had great conversation and an excellent time. I was a blessed kid to have the “neat mom”; all the kids wanted to be in her group on field trips because she was fun. I have inherited my tendency to hear my own drum from her and that is something that I’m proud of. She has always encouraged me to be my own person and I hope that I always return the favour to her.

She’s a little whacky but she puts her heart and soul into everything she does. To add whimsy to the family I’m telling my nephews to call her “Grandma Loon”. She just loves that.

Earl and I sent her flowers at work so everyone could ooh and aah as they passed by her desk. She deserves the attention. She’s one of the best. 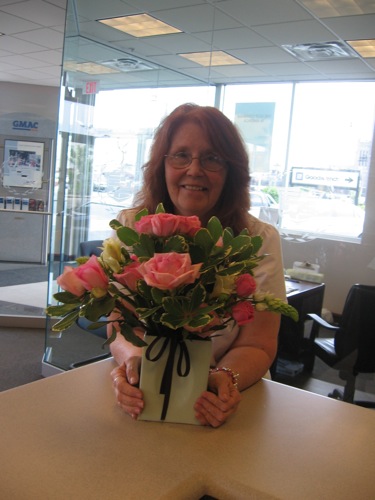 During on-call week I pick a television series to watch off of YouTube whilst I’m working in the middle of the night or waiting on hold with Verizon. This week’s choice is “Bewitched”.

It’s no secret that “Bewitched” is my favourite show of all time. I was always fascinated with the series as a child and I guess that fascination just kind of stuck around. I still find a great delight in watching any of the shows. Back in the 1980s, local independent stations would only show the third through eighth season (the colour episodes); it wasn’t until 1989 that Nick at Nite brought the first two seasons back to television, eventually restoring the prints to today’s expected quality. The first two seasons were colourized in 2000 (along with “I Dream of Jeannie”) when they were re-syndicated. The colourized episodes look colourized but not overly so, though I know from collecting photos and such that the colourization is often wrong, particularly on clothing and makeup shades.

As I grow older I tend to gravitate to the early episodes of the series and I prefer to watch them in black and white, simply because that’s the way they were originally filmed. The early episodes have a more “adult” vibe to them, especially the first 15 episodes or so. I’m in the minority of the fans that populate the various sites around the internet, but I like the show best before Tabatha was born and I especially enjoy all the original actors for the various roles that had replacements over the run of the series. (I even like the first Louise Tate, Irene Vernon, better).

There are a couple of elements from the first couple of episodes that didn’t carry through the series, for example, in the third episode the “Welcome Wagon” comes to visit Samantha in her new house. The doorbell rings and Endora “senses” who it is, remarking “Some of the girls making a call…” in a snide voice. The “mind-reading” element was played down after that, as some felt it was a little too dark for a comedy.

Watching “Bewitched” here and there during the week has made on-call a little easier to deal with. I’m looking forward to digging out the DVDs and picking up the eighth (and final) season when it’s available in July.

Quick aside: a Russian version of “Bewitched” has currently hit the airwaves over there and I have watched a couple of episodes. While I haven’t a clue as to what they’re saying, it appears they are following the original scripts from the first season of the U.S. version. It’s updated, of course but still quite fun to watch. It’s available on YouTube.

And here’s a commercial for the Russian version.