When Earl and I were in Buffalo a couple of weeks ago, our friend “Angry Alan” did a photo shoot with us. Angry Alan is a brilliant photographer currently studying at RIT.

Here is one of the shots. (The others are not really safe for work/relatives viewing). 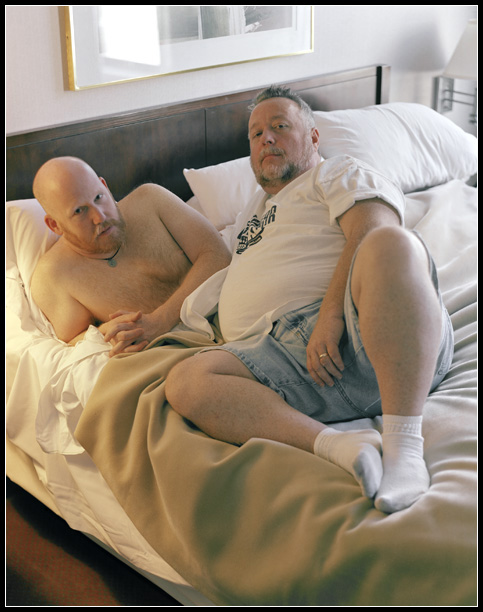 Aside from the customer who called our call center today because “the Internet is sticky and jerky today” (that was an interesting call), work has been relatively stress free and quiet today. I guess everyone is focusing on the U.S. elections today. We have been following various news sources on the events as the day goes on. Earl and I will be voting tonight after work. I’m excited to see how long we have to wait and what my number in the big book of signatures will be. I hope it’s a high number. In 2004 I was number 384 at around 6:15 p.m. That’s not a very good turnout.

One of the comments I read on CNN or MSNBC intrigued me. A woman in Arkansas told the pollster or reporter that she based her vote on “national security.” The nebulous concept was her number one priority when it came to selecting her choice for President. Her vote went to McCain.

I have often said that I am wired very differently than most but I haven’t even considered “national security” as one of my bullet points in formulating my vote. The economy? Absolutely. Energy policy? Naturally. Gay rights? Of course. There’s a smattering of other subjects that I have considered as well but national security? No. And here’s why.

I am an American. I believe that at one time the United States of American was THE best place to live on the planet. Today I believe it is ONE of the best places to live. Our policies have been a little wonky during this last administration. The liberties that we so often tout as being wonderful are slowly being taken away from us, all in the name of national security. Granted, the events of 9/11 were horrifying. A lot of people died. But how many have died in Iraq and Afghanistan since? We can not live in fear for the rest of our existence because of that. We can’t be afraid of terrorists. We can’t be afraid of immigrants. We can’t be afraid of people that are different than the some concept of the “American way”. We just can’t. There are ‘bad guys’ everywhere, on both sides of our borders. And to fear these bad guys is unproductive.

The individual that lives in fear must lead a very sad existence. Bad things happen. Bad things happen to good people and bad things happen to bad people. This is what happens and that’s just a fact of life. I blame this fear on organised religion. “If you don’t do as I say you are going to hell and you are going to burn forever.” An all loving God, damning his own creation to eternity in hell. That doesn’t even make sense. Being a reincarnationist, I figure if you screw up this life you’re coming back to learn better lessons the next time. When I was a youngster I asked my mother what hell was. She told me she believed that THIS is it and explained why. I know that she was absolutely right.

Living in fear. So sad. And so unfortunate that you base your vote in this historical election on the fear that you’re being fed. “Vote for me or bad things will happen.” So unfortunate.

Don’t live in fear. Live full of hope. But most importantly, vote!