Have I mentioned anything about the upcoming U.S. Presidential elections lately? I think I might have. There are some things going on with this election that I find to be ridiculous. For example, I find John McCain to be ridiculous. He’s essentially hit the pause button his campaign so he can save us from the economy, when of course as late as last week he said, “The fundamentals of our economy are strong.”1 Naturally he said this as Wall Street was imploding. To keep things fair I have to admit that I’m not super enthusiastic about Obama but I truly believe he has a lot more to offer than McCain does. I certainly hope that he’ll get the chance to prove me right.

Meanwhile, Vice Presidential candidate Sarah Palin (she’s the one that can see Russia from her house!) made Katie Couric look angry during a recent interview, as Ms. Palin stammered and stuttered and let Katie know she’d get back to her on a few of the topics they were discussing. I love this recap of the the governor’s interview:

In a 40-minute session with Couric that aired Wednesday and Thursday nights, the Alaska governor defended her puzzling claim that geographic proximity makes her some sort of expert on Russia; went nearly blank when queried about McCain’s achievements as a big-business regulator; agreed America “may find itself” on the road to another Great Depression; and, promoting a troop surge in Afghanistan, casually suggested that it “will lead us to victory there, as it has proven to have done in Iraq.” 2 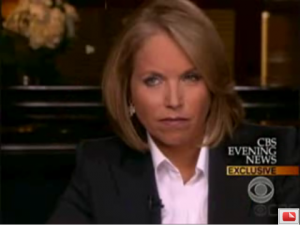 Katie looks like she wants to just rip the woman’s head off. And I don’t blame her, I mean, aside from giving idiotic answers and IOUs for responses to policy questions, who in their right mind goes hunting from a helicopter anyway? Isn’t that what Sarah does? I believe she flies around in a helicopter and shoots at moose or something. I’m not a fan of hunting in any way, shape or form but the people I know that enjoy the sport actually run around and chase the animals down, sort of in the way that SomeOne intended. Granted, the whole gun thing seems a little unfair to the animals but when you bring into the helicopters into the mix, well that’s just high-flying crazy.

You know what really frustrates me, though? All this talk about religion when it comes to the Presidential election. I don’t know if it’s because the way I was raised or what but who the hell cares what religion anyone is? Personally, I’m not a fan of religion. I think organised religion is dangerous and in most cases a society-accepted scam. Now don’t misinterpret these statements to mean that I’m knocking spirituality because I fully believe that humans are nowhere as significant as we claim to be. I fully believe in a greater cause, a greater good, a higher power and all encompassing love. People don’t pay for that all encompassing love thing so the religious zealots have to scare you to death with talks of hell and damnation.

When I was in the hospital in 2005 they asked me what my religion was. I was born, baptised and confirmed as Methodist. I didn’t really subscribe to the whole Methodist thing, even though the Methodists seem to be rather broadminded about many topics. I guess Methodist is a nice, middle of the road sort of religion where you can go once or twice a year, drop a hundred buckets into the collection plate and be good until the next religious holiday. I always felt it odd that the minister was up there saying wise things as if they were closer to God than I but I’ve always felt close to the Universe. I don’t need a middle man between me and whatever is out there, up there. Anyways, they wanted my religion in the hospital and I decided to take a stand. My beliefs are closer to Pagan than anything else so I told them that I was Pagan.

This made the admitting nurse take pause.

I don’t know why this made the nurse take pause (nevertheless I giggled) but truth be known I read a LOT of books on Paganism and Wicca and I celebrate all the Wiccan holidays. I even go sky clad in the middle of the night from time to time. Nevertheless, the admitting nurse shrunk a little bit like I was going to turn her into a toad or something.

Why do I discuss this now? Well, it seems that the minister of Sarah Palin’s church is some sort of witch hunter. Now, if he wants to hunt witches on his own free time that’s groovy. If it makes you feel better to chase witches down and brings you some sort of sense of higher consciousness then get out the garlic and shake whatever you shake and go witch hunting. But when all of this gets mixed up with the government of the United States? Uh, nope. Wrong answer. Keep it to yourself.

I mentioned last night that this feels like some weird reality show called “Who Wants To Be President?” I don’t believe that any run up to a recent election has ever been so, well, bizarre. Last night I gave the impression that I was nervous about the outcome of this election.

I’m frustrated. I’m determined to make a difference. And this witch says bring it on.