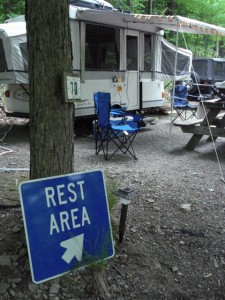 So Earl and I are back from camp and getting ready for our week. Since we are camping two weeks in a row, we secured the same site and was able to leave the camper for the week. It made the journey home much easier. Next week, not so much.

We stopped in Binghamton at Applebee’s for some lunch. We were seated, noted that the busboy was very attractive (and surprisingly, in a wheelchair, you don’t see many busboys in Applebee’s in a wheelchair) and gazed over the menu. Ten minutes later, we walked out as no one bothered to help us. We had no server stop by, there was nothing for the attractive busboy to clean up and we were parched, so we just walked out.

We drove up Front Street one block to Quizno’s. The place was relatively quiet, I noted a gay couple with a young daughter and another man and woman sitting near the door. I ordered and looked around. It was then that I realised that one of the guys with the daughter looked familiar.

I went to college with him over 20 years ago. He had a very musical name (and it’s wicked easy to remember), was a fantastic trombone player and was coaxed out of the closet at the end of our second semester together by yours truly. We never did anything though. He just needed guidance.

We shook hands, couldn’t believe we were seeing each other and made a little small talk. We’ll probably see each other again when we’re 60.

The meal at Quizno’s was prompt and delicious, by the way.

It is Saturday morning here at Hillside Campgrounds. We kicked off another camping season with our arrival yesterday afternoon. We are focusing on relaxation this weekend.

The camper decided that it needed a little TLC. When I hooked up the water and turned it on, the hose from the water supply to the sink broke, which in turn spewed water all over the camper. I needed to mop anyway. Earl ran to the nearby town of New Milford and picked up a bunch of parts to make the repair. They didn’t have the exact pipe that we needed but he was able to MacGuyver something close. Everything was fine 90 minutes later. I guess I need to do a better job of winterising in the future.

It’s a relatively quiet weekend here. There are a number of sites available but then again it’s still early in the season. I think the weather forecast scared a few away; it’s been raining steadily this morning. The sound of the rain on the camper makes for great sleeping. The forecasters are promising thunderstorms this afternoon. I always love a good thunderstorm, especially in the middle of the dense woods.

Last night we hung at the campfire with our friends Sean and Jeffrey, Don and George (all from Albany) and Brad, Brian and Robert from New Jersey. It was good to see all the guys; it has been too long since we had last seen them. Today we are all going to Brian’s 40th birthday party at their site. It will be a good time.

Here’s a little video I made.