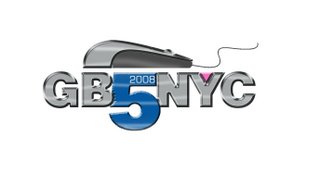 Earl and I are planning a little vacation the week between my spring and summer semesters. I think we are going to spend five days or so in New York. We’ll take the train down and do the Big Apple thing. This way we’ll be sure to be at GB:NYC5 (or is it GB5:NYC?)! (Gay Blogger meet)

Here’s a picture from last year’s GB:NYC. We had a lot of fun on “Bear Hill” in Central Park.

The Shubert Theatre is a ‘union hall’ where they employ capable technicians to do capable, yet specific things for all the performances at said venue. This is the way these things work and in many cases the techs can be somewhat cranky; I was fortunate to encounter an easy-going sound man that was very content with me mixing and running the show after he got everything setup to their specs. (He was basically getting paid to make sure I didn’t blow the place up). The show went off nearly-flawlessly as far as sound production is concerned (there was a couple of microphone glitches that I was partly responsible for) but for the most part I was pleased with the sound of the show. I know the audience was entertained and the performers had fun so that’s what’s most important to me. I hope to have the opportunity to do this sort of work again in the near future, because I really like it a lot.

One of the songs performed in the show is “Could It Be Magic” by Barry Manilow. It’s a 1993 remix that I introduced Greg (the director) to back in January and he decided it to use it in the show and give it to David, a performer that hasn’t had the opportunity to sing a solo with the chorus before. David got together with Jeffrey and arranged the song into a duet (complete with choreography) that I have to admit was quite impressive. I have performed this version of the song at various charity benefits over the years but I’m going to say that David’s performance of the track literally brought tears to my eyes and gave me goosebumps. When Earl came down out of the balcony after the show, he remarked that “Could It Be Magic” was excellent and gave him goosebumps. It’s good to a performer shine when given the chance.

After the performance, Earl and I joined Greg (director), Bob (partner) (of “Greg and Bob” that I mention from time to time) and Nicole (Bob’s friend) and headed to the cast party at the York Street Café and Bar where we had a really good time. There’s a certain amount of intrigue that comes with being a relatively unfamiliar face in a city and Earl and I sort of revel in that. We made some new friends and look forward to visiting New Haven again soon. As always Greg and Bob were very hospitable. We like them.

This morning we met up with Greg and Bob (the same ones) for brunch at the same café before they went to New York (the city one) to see Gypsy while we went left for New York (the state one), which we call home.