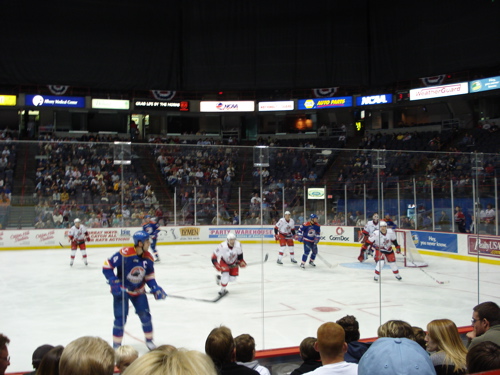 Earl and I spent the evening in the Capital city of Albany for the Albany River Rats hockey game. I’m not much of a hockey fan, but I always enjoy going to a game for several reasons, the least of which is the actual game itself. It’s not that I don’t enjoy watching the game, but I’m always so fascinated by the people at the game.

First of all, hockey stands out in my head because it’s the only team sport I can think of that encourages unsportsmanlike behavior. (That cringing you hear is my sister’s boyfriend, a professional hockey player. They call him The Instigator.) The crowd goes wild when two or more hockey players start throwing down their equipment and beat the hell out of each other. What’s up with that?

One of my favorite activities at a game is to make as many odd noises as possible. The Jumbotron and the announcer both encourage everyone to get loud, so I go through a whole selection of loud noises, including the traditional sportsfan chants, bear-like ‘woofs’, Xena war cries and blood curling screams. If the encouragement for noise continues through this selection, I then resort to yelling “kitty” as if I was beckoning the cat from 50 acres away.

The neighboring fans just love me.

When our team makes a goal, I like to hold my popcorn and jump up in the air so that I send a shower of popcorn to celebrate. I feel it’s a fan thing to do.

Tonight’s game was a bit of a bummer, in that we had to go through various overtime exercises before finally losing the game, but what I found more disturbing was the rendition of “God Bless America” and our National Anthem. A bunch of elementary school kids were herded out onto the ice (on carpet pieces), where the music teacher grabbed the mic and croaked out some weird verse of the former that I had never heard of. To keep it interesting, she consistently ignored the key and avoided any sort of tempo. Her students then joined in behind her. Since she was playing random with the pitch, the students had no hope of keeping up with her and it was, in my opinion, probably the worst rendition of “God Bless America” I have heard in my 39 years on this planet.

But they had spirit.

This was quickly followed up with a junior high chorus, also herded out on the ice, who promptly sang our National Anthem, again in random keys that changed throughout the song. Deciding enough was enough, I joined a drunk man several rows back by singing the National Anthem as strongly as I could and I chose to remain in the key that the group was in when I decided to join them. If I’m going to be proud of this country, I’m going to do it out loud.

Now you’re probably thinking I’m throwing some cheap shots out and let’s see me do any better. Tell you what, I’ve sang the National Anthem in sports arenas on several occasions (solo and a cappella) so I feel like I can be a bit of a critique on the subject. I’m just saying. I would welcome the chance to do it again.

All in all it was a fun night.