Today was “Family Day” in that Earl and I went up to my Dad’s house to spend the afternoon with my dad and stepmom and my sister and her boyfriend. The weather was beautiful so we ate out on the back porch, catching each other up on our current events and reminiscing about the old days. The more wine and beer that was consumed, the livelier the conversation got.

After dinner we headed over to my grandparent’s house, which is across the street from my dad’s house. My grandfather passed a couple of years ago and the house has been sitting empty for the past year or so, on the market, waiting for it’s opportunity to become a home for a new family. I have to admit it’s hard to see your grandparent’s house in that state. It’s weird to walk into the kitchen and not smell something baking in the kitchen.

There are still a few odds and ends left in the house, including the thousands of slides my grandfather took over the past several decades. I have officially inherited all the slides, which I intend on scanning in for digital safekeeping and sharing. Before my grandmother’s death in 1996, my grandparents would travel the country two months out of the year (in February and in September). They usually limited their travels to the U.S. and Canada and embarked on the journey by automobile whenever possible. Talk about the blueprint for Earl and my travel habits! My grandfather was an avid amateur photographer and enjoyed taking slides to share at the holiday gatherings. My grandmother was scrapbooking way before it was en vogue. There are a ton of albums with newspaper clippings which documenting major, minor and mundane events in the little town that I grew up in. In addition, my grandmother also took a bunch of photos, which were all neatly organized in photo albums.

Tonight I snagged a few of the photo albums (temporarily) so that I could scan in the photos. My sister and I were the lucky grandchildren in that we lived next door, and later across the street, from my grandparents. So we are in quite a few photos.

Needless to say, happy tears were flowing before long.

One of the most beautiful things I noticed about the photos is that no matter the circumstance, the timeframe or the location, my grandparents are holding hands when in a ‘posed’ photo together. They were married just shy of 60 years when my grandmother passed on. They always looked happy. And surprisingly, the visited many of the same locations that Earl and I have visited on our adventures. Earl remarked, “So that’s where you get it from.”

Here’s a couple of photos I’ve already scanned in.

The first is from June 1973. My sister and I are playing on the doghouse my father had built for his German Shepherd. This was either from before the dog arrived or after he moved in with the farmer down the street after being asked to leave due to incessant barking. 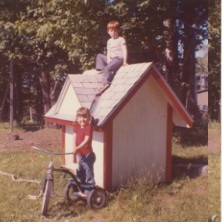 This photo is from fall 1973. I believe this is from my first day of kindergarten. My mom and my sister joined me while I waited for the bus on the front porch. I really love this picture. My mom has a look of pride in her face that made me tear up when I saw this photo today. 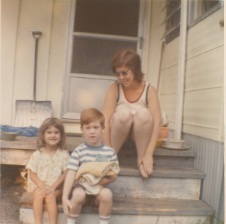 This photo is marked September 1974. I believe this is my first motorcycle ride with my father on his 1969 BSA. I seem to recall that there were minor hysterics because Dad thought I was ready to ride when others that the contrary. I also remember being really excited about riding on the back of the motorcycle. 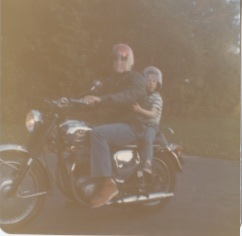 I thank the Universe for blessing me with such a wonderful childhood.