Now that I’m awake and can hopefully write coherently. As I mentioned last night, I was co-host for a local scholarship pageant, Miss Mohawk Valley. This was my third time as the host, and this year I shared the duties with the current Miss New York, Bethlene Pancoast. I was a little nervous about sharing the spotlight in this regard for two reasons: 1. I often see myself as a bumbling fool when I’m on stage and Bethlene has a wonderous stage presence about her and 2. I don’t have a lot of experience with co-hosting as during my radio days I was mostly a solo act.

It turned out that my fears were for nothing (which is usually the case) as I had a wonderful time at the gig. The executive director of the pageant provides me with a script and asks that I stick to it. I rarely do that and to keep things interesting I save my ad-libs for the actual performance. I like to add an air of spontaneity. For example, last night I took stopped the show to take a picture of the audience. 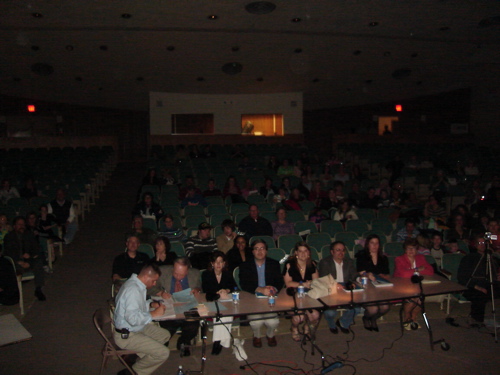 As you can see there were about 100 people or so. Perhaps the chair-fillers were in the rest room as this was just prior to intermission. One unintentional ad-lib was when I flipped two cue cards instead of one, skipping a contestant during the talent portion which meant I introduced the wrong one, throwing the entire backstage crew into a panic as walky-talkies started squawking “he’s skipping! what’s he doing! stop him!” and sets started moving around to adjust for my erroneous dialogue. Bethlene came out and corrected me, and all got back on track. To cover, I made a few jokes about “deja vu” as I ran through the same dialogue again at the right time. Next year my agent will have to make sure there’s a teleprompter instead of cue cards written in crayon.

All in all, it was a great experience. The new Miss Mohawk Valley is Theresa Tokarowski, originally froom Amsterdam (N.Y.) and an exceptionally talented graduate of the Manhattan School of Music. From here she goes to Miss New York and then from there she would go on to compete for Miss America.

I really admire the ladies in these pageants as some are just finishing high school, there seems to be a lot of outfit changes involving dressing assistants, there’s that whole talent thing where you have to be absolutely spectacular in less than two minutes and it has to be absolutely nervewracking to be asked a question that will most likely be politically charged yet have nothing to do with world peace. I found Bethlene to be an amazing woman in that she is completely down to earth, yet confident and strikingly beautiful. And Theresa is like her in many regards. I wish them both success.

Then there’s me, the goofball on stage comparing myself to Ryan Seacrest and hamming it up on stage. I guess I did o.k. though, I’ve been asked to come back next year for more fun.

Here I am with Bethlene and the contestants, getting ready to make the big announcement. 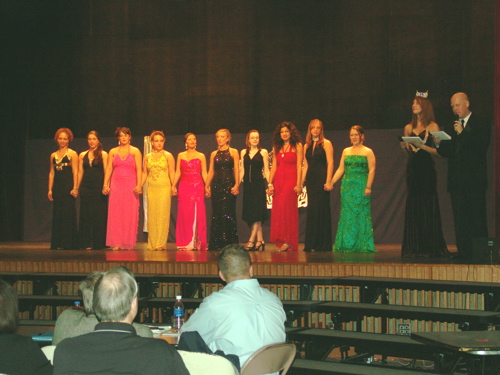 And here’s a photo of Earl and I with Miss Mohawk Valley 2007. 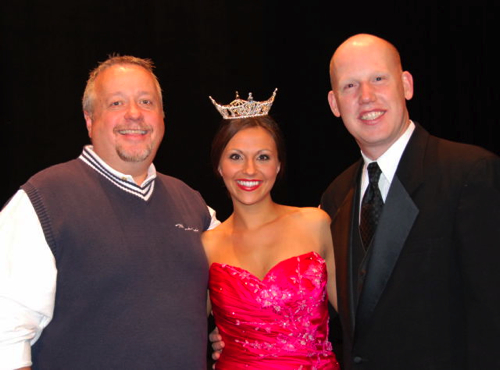