Every impulse in my body screams that Earl and I should be taking some sort of mini Jeep tour this weekend. I’d love to see us jump in the Jeep, bag in tow, and go someplace, anyplace and just hang out. But my work schedule isn’t really affording us that luxury this weekend, so we’re going to do something here at home.

We are going to have a picnic in the backyard.

I’m actually looking forward to spending the weekend at home and enjoying some (fingers crossed) down time. I have to work on Monday so it’s not really a long weekend for me, but thought sentiment is still there. But this Saturday and/or Sunday we are going to fire up the grill and have us some good JPnEarl cooked food and a couple of beers.

It was a bright, beautifully sunny day here in Central New York today. Unfortunately, that did not stop the flood waters that are literally swamping parts of New York, Pennsylvania and Maryland. As I type this entry, it’s raining again, with thunderstorms and heavy rain predicted through midnight.

Work has been somewhat hectic as we are trying to keep up with telephone service repairs. It’s not easy to fix one telephone wire, let alone a junction box with several thousand wires, under several feet of water. This is one of the few occasions where I’m happy to be inside in the Network Operations Center instead of being out in the field getting dirty, and wet. Bravo to the crews out there that are helping in any way they can.

Earl’s company’s plant in Binghamton was four feet underwater as of yesterday. Today the water had retreated to less than a foot.

My aunt that lives in Conklin, just south of Binghamton, was rescued from her home as it was being flooded. Apparently she was airlifted out by helicopter. A home down the street from her house blew up from presumably a ruptured gas main.

The Fonda Speedway in the Mohawk Valley would more appropriately be called Lake Fonda. Perhaps they can race speedboats instead of supermods this weekend.

Any roadway, except the main expressway, that crosses the Mohawk River near our home is currently closed. No mall for this boy tonight, as it’s hard to just get there from here. It’s not worth the effort anyway.

I heard the sun will come out tomorrow.

Lunch In The Sun.

A couple of days ago I mentioned a little bit of disappointment I had felt because I attended my high school annual alumni dinner and I was the only one from the class of 1986 in attendance. While the whole affair was quite enjoyable, I was looking forward to seeing how some of my contemporaries were doing.

Well today a little handout arrived in the mail advertising my high school class’ 20 year reunion, to be held during the annual Field Days on August 4! I can not believe that I’m actually looking forward to getting together with my old classmates but I have to admit that I am.

Here’s a picture of my grandmother, my mom and myself taken right after my graduation on June 29, 1986. I’m happy to say that I’ve exceeded my own expectations of where I’d be today. 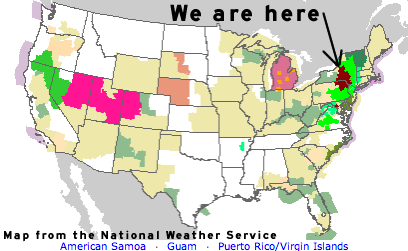 It has been raining for the past 24 hours. It’s been coming down pretty much non-stop. They say it’s going to just keep raining for a while.

And tonight, the floods arrived.

Have you ever took a moment and pondered what your cat or dog thinks about you? I sometimes do. For example, as I type this blog entry, Tom is looking at me like I’m rather nuts and is voicing his displeasure with what I am currently doing. This is totally going to go into the “Too Much Information” file, but I’m typing this on my PowerBook while sitting on the john.

I believe in multitasking.

Tom and I have a lunch routine that must not deviate or else he’ll express his disappointment in me by meowing and making burying motions over his food dish.

I do wonder why he is so adherent to a timetable. Is it because I need to keep to a timetable myself? Have I trained him to do things in a certain way, or has he trained me?

There are moments when we’re out and about that I’ll see some random animal in our travels and wonder what they’re thinking. Does the pooch in the purse really like being in a purse? Is the squirrel trying to eavesdrop on a phone conversation while running across the road via telephone line? Do the birds really look for clean cars to do their business?

I find it all very curious.

I’ve discovered a lovely little sitcom on YouTube. It’s call “My Wife, The Ghost”. It’s filmed in fabulous black and white and edited in a traditional 50s or 60s style in the likes of “Bewitched” and whatnot. Sure, the premise is a little dark but it’s actually quite fun to watch.

I’m in awe of the production value of the episodes and now I’m totally inspired for my next video project.

Take a peek on You Tube.

Sometimes, I think we all need to go back and remember when things were simply stated. Take a look at these videos on youtube.

I think we should sit down all the politicians and remind them to stop making things so complicated!

A couple of months ago Earl and I installed a garbage disposal in our kitchen sink to aid with the mess we make when we cook and attempt to clean up afterwards. We both grew up in households where discarded vegetables down the drain are good and discarded vegetables in the garbage can are bad.

The key to garbage disposal success is to run it after filling it and giving it a drink of water while it’s doing it’s thing.

One of us, and I’ll go out on a limb and take the blame for this, forgot to run the garbage disposal after shoving some things into on Friday night. Come Sunday morning, it was showing it’s complaint by giving off a less than delicious odor. So while we were at the market yesterday, we picked up these lemony things that you drop in a grind up, thereby releasing a wonderful gas that should make the whole Garbage Disposal Experience pleasant again.

The kitchen smells like someone got frisky with the Pine-Sol. Lots of Pine-Sol.

I don’t think I understand the logic behind a “lemon fresh scent”. Who says that the smell of lemons means it clean? I mean, I don’t think we’ve ever seen a person getting prepped for surgery by orderlies rubbing lemon juice all over them. We would assume that said patient is clean but I’m sure he or she doesn’t smell lemon fresh when they’re wheeled into the operating room, a sprig of parsley on the side notwithstanding.

The truth be known, this decidedly chemically induced lemon scent is giving me a damn headache. So I’ll probably take an aspirin before going back to work. I think I’ve learned my lesson and will remember to run the disposal (is it disposal or disposer?) in the future.

And I think I’ll discard the rest of the lemon drops. You think I would have learned after my last run in with cleaning scents.