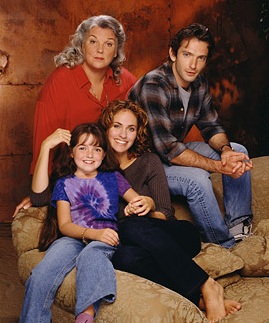 I’ve written the fine folks at CBS over 30 e-mails regarding the cancellation of Judging Amy. I’ve sent two typed letters and three handwritten letters. I’ve received over *100* e-mails and countless blog entry comments from dismayed fans about the cancellation of this show. Google searches turn up disappointment all over the internet.

I still have yet to hear from the “fine” folks at CBS.

Just think what I would have been like during the cancellation of the original series of Star Trek!

At the very least someone could send me an autographed photo from Amy Brenneman.

I decided to celebrate my feeling better today by going for a walk during lunch. The sun was shining brightly, the breeze was mild and the enchantment of October was riding the wind. So I decided I needed to enjoy our downtown area. This is about a block from where I work. As you can see, the streets aren’t that busy at lunch time!

As I look at this photo, I realize that downtown looks like a city scape you’d see on a “behind the scenes” movie tour set you’d see at Walt Disney World or Universal Studios. All that’s missing is the fountain that the Friends played on.

Yesterday when I arrived home from work early because I was feeling so lousy, I took a few moments, meditated and asked for help with getting better from the Universe. I said aloud that I would stop taking cold medicine and chemical medication in efforts to ease or cure my sniffles. I asked to have these sniffles and associated symptoms purged from my body so that I could go out in the world and strive to be a positive influence on all those around me.

This morning I feel like a million bucks. No sniffles, no achy, no fever. I thanked the Universe for the help.